Pick up your badge and chase down the LEGO® City 60171 Mountain Fugitives! This exciting police chase construction toy for 5-12 year olds features a tree hideout with space for loot, moving greenery and a beehive, plus a police ATV with off-road tires, bubble light, radio and chain. Includes 4 minifigures. 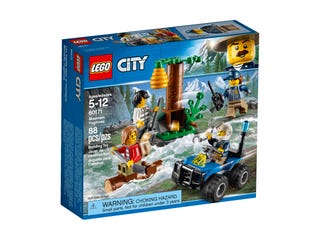 Overall RatingAverage rating5out of 5 stars
5.0
(3 Reviews)
100% would recommend this product.

Level of DifficultyAverage rating2out of 5 stars
2.0
Please note that by submitting a helpfulness vote on a review your IP address is collected and stored by our trusted third party service provider for the sole purpose of preventing multiple entries from the same IP address. To see how to control your personal data, please see our Privacy policy.