Grab your hard hat and head out with the LEGO® City 60184 Mining Team to dig for gold! This fun mining toy, with mining figures and equipment features a rock pile with space for golden nugget and rock breakaway elements, as well as a dumper with tipping bed and space for a minifigure, plus a research station. Includes 4 minifigures and a glow-in-the-dark spider figure. 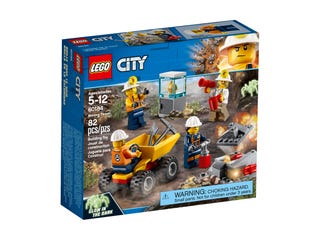