The best LEGO® planes and helicopters | The Official LEGO Shop

This is your captain speaking – everyone loves flying machines. Whether it’s a super-fast jet, a fire and rescue helicopter, or a ninja combat airplane, there’s something amazing about soaring through the air.

When it comes to playing pilot, there are all sorts of LEGO® sets ready to take off. These are seven of our favorites. 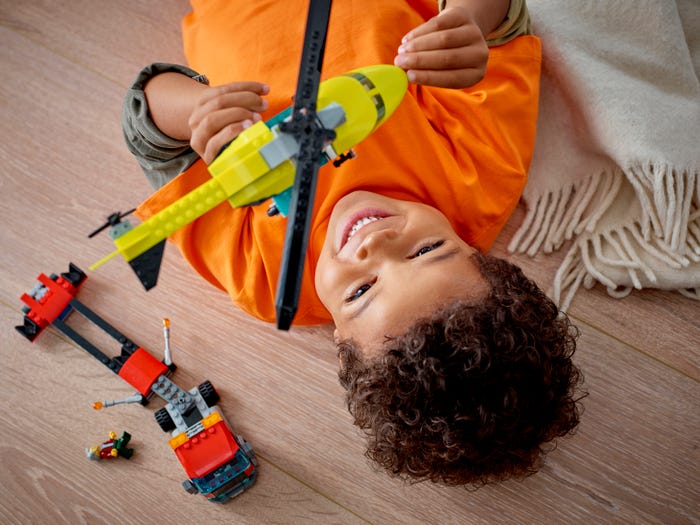 Take adventures where they need to go with this transport truck carrying the city’s new rescue helicopter!

With an articulated trailer and fold-out warning lights, this heavy-duty truck is ready to navigate to the rescue base or directly to the action. Set up, unpack, and launch the helicopter into the air with its pilot minifigure while the driver handles the scene on the ground.

The helicopter features spinnable rotors as well as a storage area for carrying the included stretcher. 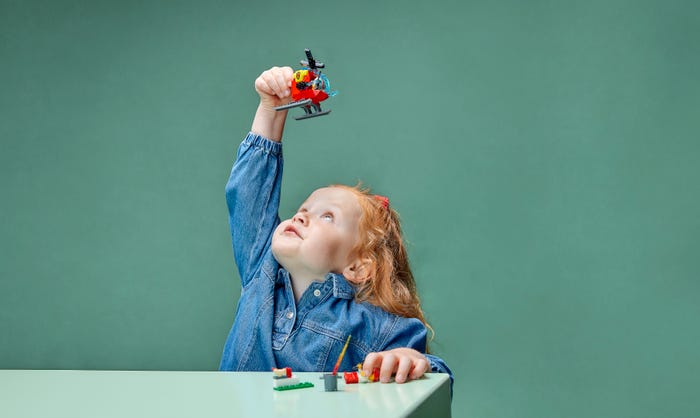 That’s one hot dog! The hotdog vendor overcooked his merchandise and his garbage can is on fire.

Call in the LEGO® City firefighter and his fully equipped helicopter to swoop in and extinguish the flames. The helicopter features spinning rotors and a storage area for any supplies the fire team might need.

Once the crisis is averted, the firefighter can pick up a tasty hotdog for himself – though maybe not the burnt one! 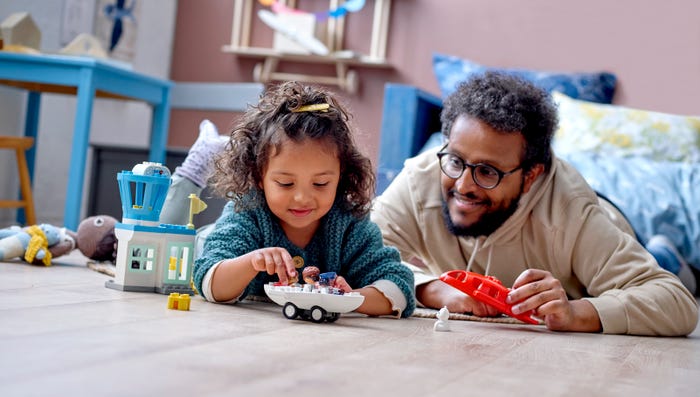 Young ones can take to the air with the DUPLO® dad and daughter on their way to see family and friends.

Help them board the airplane and remove the top section so play can continue aboard – or explore the airport with its opening door and rotating airport control tower, including a luggage slide.

Builders are cleared for landing! 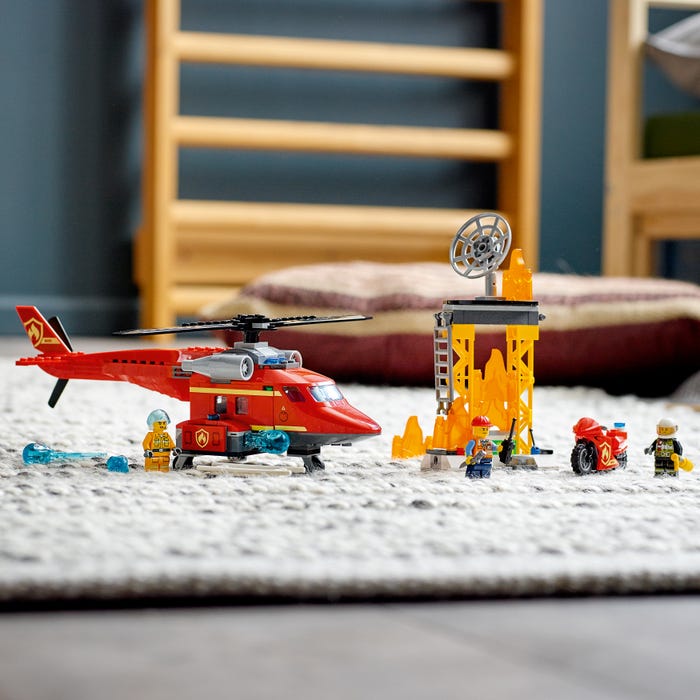 Oh no – the power plant is on fire! But don’t worry, the LEGO® Fire Rescue Helicopter is on the scene. Kids can stack LEGO flames to build the scene and then launch water pieces from the helicopter’s cannons to avert disaster.

This LEGO helicopter set comes equipped with a high-speed fire rescue motorcycle so the LEGO City TV hero Clemmons can get to the action on wheels as well as by air.

Tackle every disaster with included accessories like the stretcher, which can be stored in the helicopter’s cargo hold, a firefighter helmet and a wrench. Worker and pilot minifigures are included with Clemmons to support full rescue missions and help your kids pilot everyone to safety. 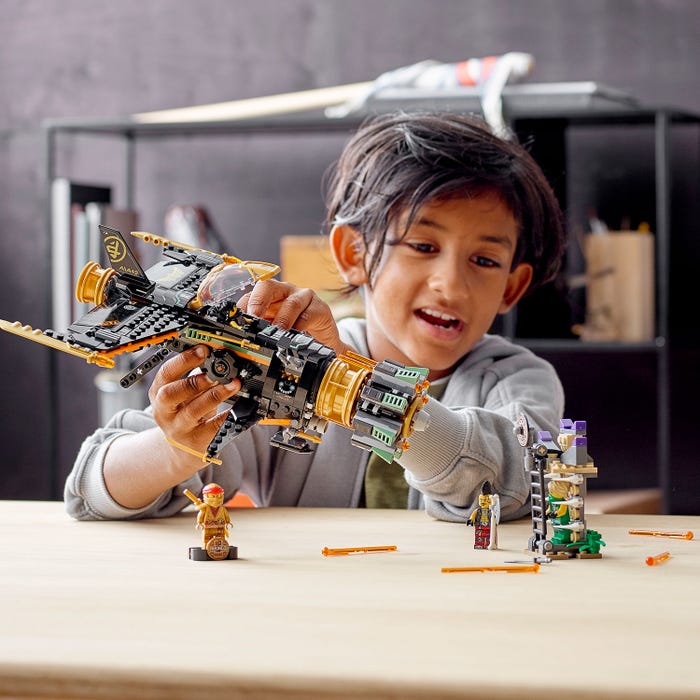 The only toy better than an airplane toy is a ninja airplane toy! From season 4 of the LEGO® NINJAGO® TV series, the Boulder Blaster shooting airplane lets your kids act out scenes from the show by launching each of the 8 spring-loaded shooters on the front to take down the evil Eyezor.

The set comes with a prison building where Lloyd is trapped – go on exciting, daredevil rescue missions to save your ninja ally!

The set comes with minifigures of the ninjas Cole and Lloyd as well as the villain Eyezor so kids can play out epic battles of good vs. evil as they take the Boulder Blaster to the skies.

The set also includes a special golden Kai Legacy collectible minifigure with a stand to celebrate the 10th anniversary of NINJAGO toys. 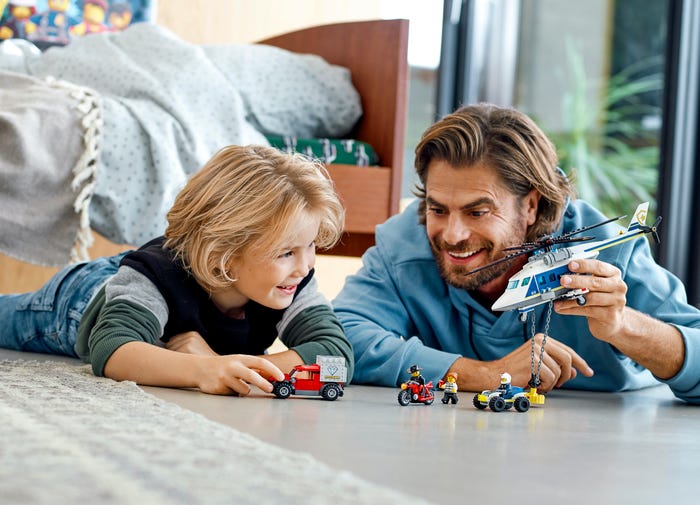 Criminals beware as this LEGO® Police Helicopter Chase set swoops in to save the day.

Featuring a LEGO City police helicopter and all-terrain vehicle as well as crime-fighters Sam Grizzled and his partner, children will be equipped to chase down the crooks as they try to get away on their truck and motorbike.

This LEGO helicopter set features a real magnet for grabbing the stolen safe off the back of the villain’s truck – if the good guys are fast enough.

And once the infamous LEGO City TV crook Snake Rattler is caught, he can be snapped in cuffs and put away for good! 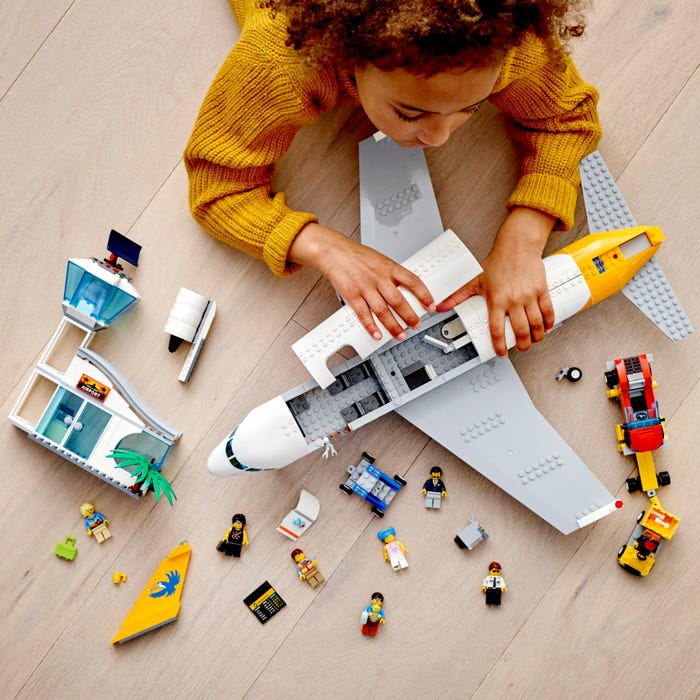 The LEGO® Passenger Airplane is coming in for a landing. With eight different minifigures, including singer Poppy Starr from the LEGO City Adventures TV series, there are plenty of people waiting to get on board.

The huge aircraft has seating for the pilot and passengers, and there’s even room onboard for Poppy’s red convertible automobile. This LEGO airplane toy for kids and adults comes with a control tower and a terminal that even has a luggage conveyor.

The set also incorporates an airport truck, a car lift and an airstair, as well as loads of accessories to make it feel like a real airport.

With 669 pieces and a removable top to the airplane, this is a set that you can play with again and again.

Tackle blazing buildings and save civilians from dangerous infernos from the safety of playtime with these top fire engine toys for kids of all ages!

Whether for saving the day, transporting goods or going off-road, there’s a LEGO truck toy gearing up for your next playtime adventure!

Beef up your vehicle toy collection with the biggest, most indestructible racing machines around. Complete crazy stunts – or build something entirely new!

Ready, set, go! These top LEGO® car toys are perfect for any fan of the four-wheeled favorites, with something for everyone no matter their age.

Go out on patrol and put the crooks back where they belong! Protect the city from the bad guys with these top cop LEGO® sets for heroes of all ages.

Your young racer got the need for speed? Give the green light to great new playtimes with the best in LEGO® race car sets.

Young builders at work! Construct a new adventure with trucks, bulldozers, cranes and more with the very best of the LEGO® construction collection.

Put on your helmet and get ready to race with the coolest LEGO® motorcycle toys in town. Some are fast, some are classic, and some have a few surprises in store!

Zoom back to our LEGO® Vehicle Toys homepage