Shop more like this:
6+Ages
311Pieces
219
VIP Points
752797527975279Item
Kids can wake up to a gift every day in the run-up to Christmas with the 2020 LEGO® Star Wars™ Advent Calendar (75279) holiday building set. Behind each of the 24 doors is a Star Wars LEGO minifigure, LEGO figure, buildable starship, vehicle or location. Also, look out for a code to unlock Star Wars: The Skywalker Saga game content. Quick builds, unlimited creative fun There are 6 LEGO minifigures and 6 LEGO figures to discover, such as Darth Vader with Christmas sweater decoration and D-O with a festive hat, plus a foldout playmat with an image of the Millennium Falcon with Christmas lights to inspire creative play. The 12 mini builds in this holiday calendar include Anakin’s Podracer, a Republic Cruiser and Darth Vader’s Castle. Great gift ideas Since 1999, the LEGO Group has been recreating iconic starships, vehicles, locations and characters from the legendary Star Wars universe. LEGO Star Wars building toys are hugely popular, with fun Christmas gift ideas for kids and fans of all ages.
Building Instructions 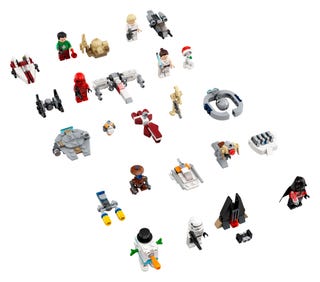 Some exclusions apply. Visit our Deliveries and Returns page for more information.
Overall RatingAverage rating4.8out of 5 stars
4.8
(6 Reviews)
100% would recommend this product.

Play ExperienceAverage rating4.2out of 5 stars
4.2
Level of DifficultyAverage rating1.4out of 5 stars
1.4
Value for MoneyAverage rating3.4out of 5 stars
3.4
Please note that by submitting a helpfulness vote on a review your IP address is collected and stored by our trusted third party service provider for the sole purpose of preventing multiple entries from the same IP address. To see how to control your personal data, please see our Privacy policy.