Introduce young LEGO® builders to the basics of engineering with this highly detailed LEGO Technic™ 42098 Car Transporter toy. This authentic replica model comes with a host of realistic features and functions for hours of play and design exploration. You can raise and lower the car decks and rear ramp for seamless navigation to the upper and lower levels, lock vehicles into position for safe transportation, and tilt the driver's cab to access a detailed V6 engine with moving pistons. This 2,493-piece building set also includes a blue car with working steering and V8 piston engine and is compatible in scale with the 42093 Chevrolet Corvette ZR1 (sold separately). It comes with a classic red, gray and black color scheme with stickers for additional detailing. Rebuild this 2-in-1 vehicle transporter to create the LEGO Technic Truck and Show Cars model. 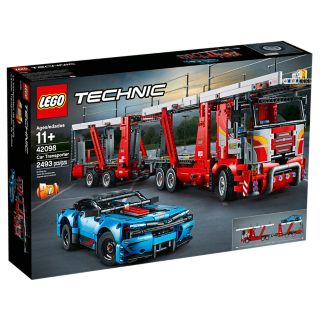 Overall RatingAverage rating4.5out of 5 stars
4.5
(14 Reviews)
93% would recommend this product.