Stop the mighty Two-Face™ Excavator with Batman’s Batcycle in this thrilling THE LEGO® BATMAN MOVIE: Two-Face™ Double Demolition set. The Two-Face Excavator has a minifigure cabin, operational excavator arm and bucket, articulated design for smooth steering. It might look like a normal digger from one side, but check out the ‘bad side’ featuring spikes on the huge wheels and a 6-stud rapid shooter. The Batcycle features an opening minifigure cockpit, rotating double stud shooter and rotating flick missile shooter. The set includes 4 minifigures who are equipped with assorted weapons and accessories to inspire endless action-packed role-play scenarios. 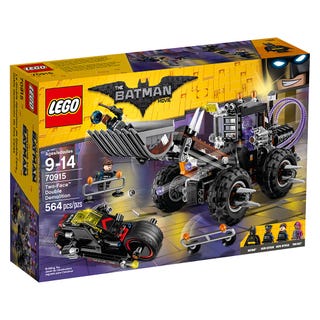