Stage an epic battle at the airport, featuring an air traffic control tower with 2 different explode functions and a luggage cart with an explode-function rear trailer. Fold out the wings of the dual cockpit Quinjet to take off and open the rear hatch to drop the rope for Captain America to grab. Then turn the switch to unleash the jet's hidden stud shooters. Includes 6 minifigures: Captain America, Winter Soldier, Scarlet Witch, Iron Man, War Machine and Agent 13, plus an Ant-Man microfigure and a buildable Giant Man figure. 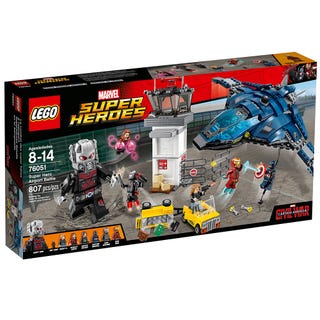