With a wave of your wand you can bring home the best gifts of magic and fun around with these sparkling LEGO® Harry Potter™ sets. Find unexpected magic in every corner of Hogwarts™, with interconnecting sets, huge character display items and all the familiar faces from the films. Mischief managed! 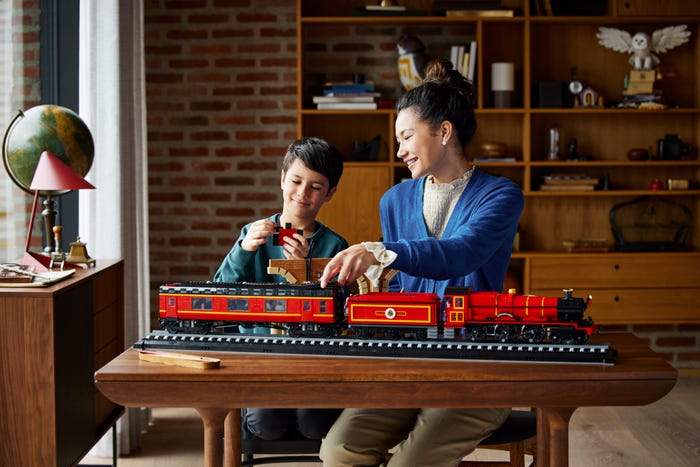 Set off on a magical journey through 4 classic scenes from the Harry Potter film series with this breathtaking build-and-display project!

The Hogwarts Express – Collectors’ Edition is packed with authentic details and memorable film references along with a cast of 20 characters, including Ron Weasley™, Hermione Granger™, Remus Lupin™, Ginny Weasley™, Draco Malfoy™ and so many more.

This 1:32 scale replica makes for an immersive passion project for adult Harry Potter enthusiasts to reminisce about classic scenes, such as Harry, Ron and Hermione’s first meeting in the first film.

There’s even a lever on top of the engine that makes the train rock, just like a real steam train! 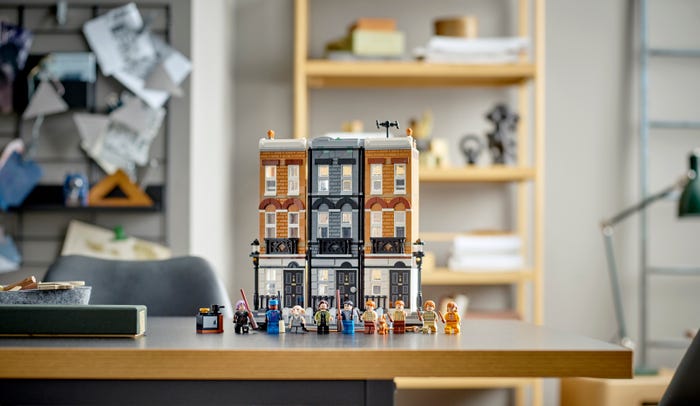 The LEGO® Harry Potter™ 12 Grimmauld Place set is filled to the brim with details and features that are faithful to this magical location from the Harry Potter movies!

This Christmas, kids can watch an ordinary-looking building transform into the 3-story Order of the Phoenix™ headquarters before their very eyes while role-playing adventures with minifigures of Harry Potter, Ron Weasley™, Sirius Black™, Nymphadora Tonks™, and more! 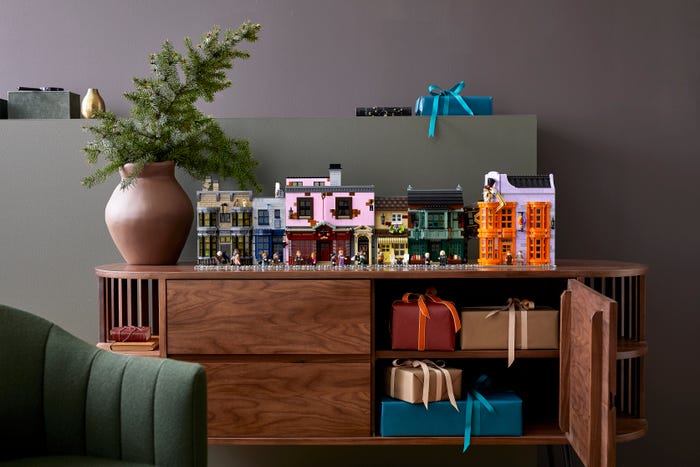 Explore the best kept shopping secret in the Wizarding World with our most detailed LEGO® Harry Potter™ Diagon Alley™ set yet!

Made up of 5,544 bricks, this can be built in four different ways, leaving endless opportunities to excite budding imaginations at Christmas time. 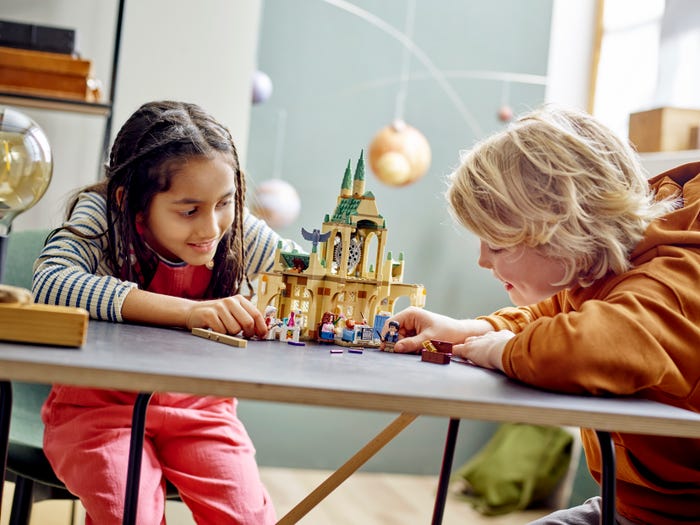 Kids can take care of Ron in the infirmary before heading to the clock tower to embark on an enchanting time-travel adventure with Harry and Hermione.

Featuring minifigures of the iconic trio plus Madam Pomfrey and a host of potions and treatments to help Ron’s injured leg recover, the LEGO® Harry Potter™ Hogwarts™ Hospital Wing set is the best Christmas gift for kids to explore their emotional intelligence through imaginative play!

“The best part about this [set] is that the clock moves!” – Camille, 9 years old 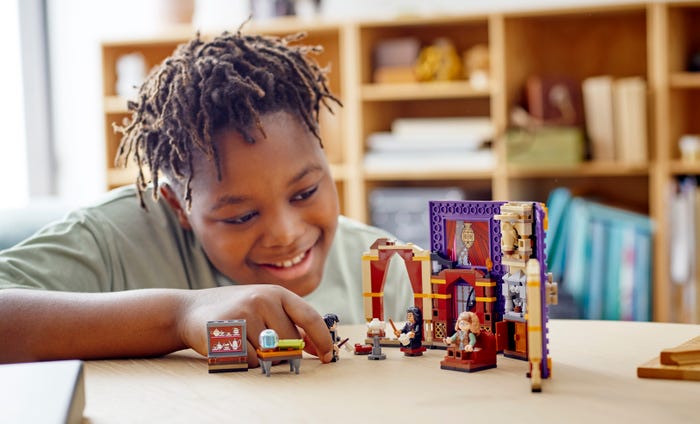 Featuring 3 minifigures of Professor Trelawney, Harry Potter and Parvati Patil along with heaps of fun elements, this versatile set packs up into a convenient brick-built playbook for magic on-the-go!

“You can play with it after you watch [the movies] and you can do it again and again” – Caterina, 7 years old 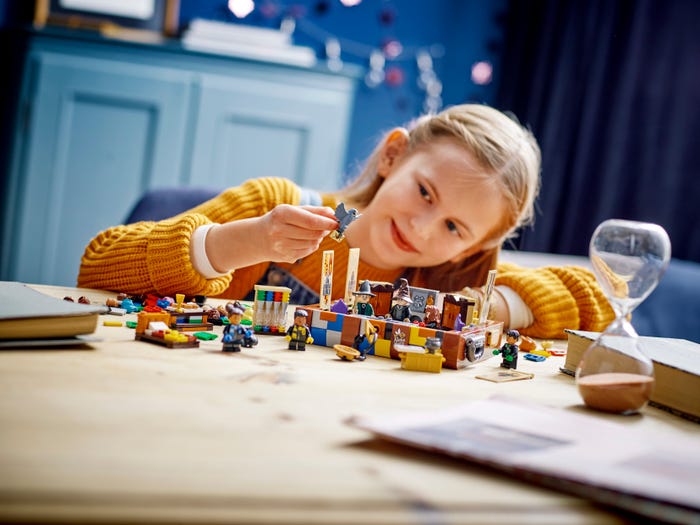 Complete with customizable minifigures to bring characters old and new to life and fun furniture accessories, this set packs up neatly into the trunk so kids never have to stray far from the magic. 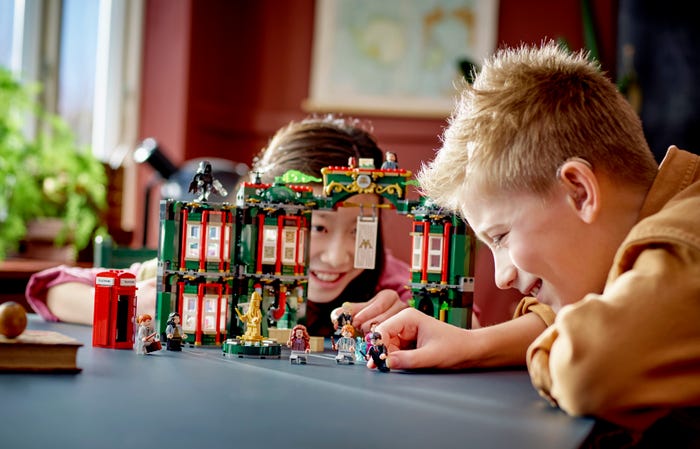 Complete with minifigures of Harry, Ron and Hermione, the LEGO® Harry Potter™ Ministry of Magic™ set brings the iconic trio together on a secret plot to infiltrate the Ministry of Magic and retrieve the Slytherin™ locket from Dolores Umbridge™! Harry Potter fans aged 9 and above will absolutely love exploring the detailed interiors that lie behind the facade, including the office of Professor Dolores Umbridge, Arthur Weasley’s office, the Hall of Prophecies and the Court Room. 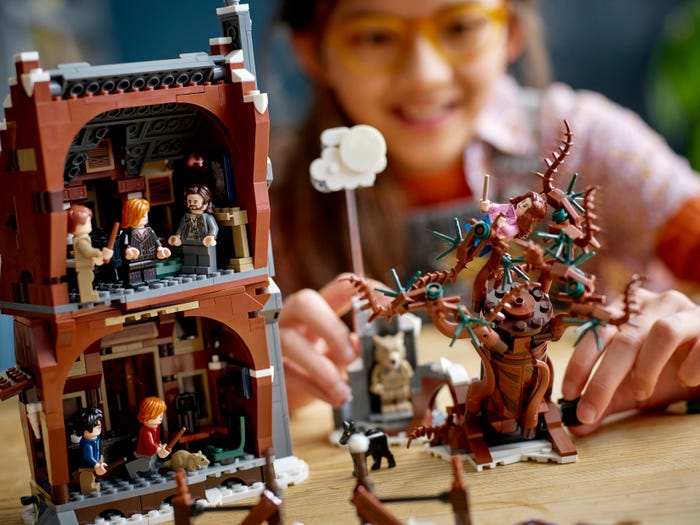 Step into the magical world of Harry Potter this Christmas with an action-packed set for Harry Potter fans aged 9+.

There’s no shortage of exciting features in this set: the Whomping Willow spins and reaches its branches down to strike minifigures and pick them up, whilst Professor Lupin transforms into a werewolf under the light of the glowing moon! With all this and so much more, there’s endless hours of fun to be had recreating scenes from these iconic locations! 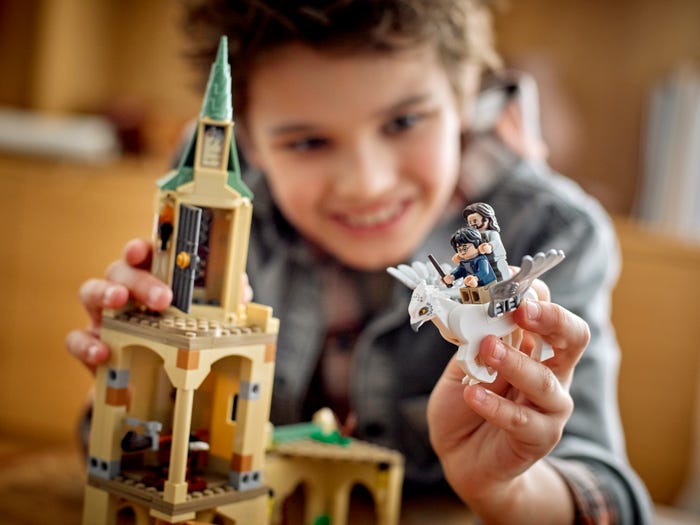 Take Harry Potter and Hermione Granger™ on a covert rescue mission to free Sirius Black™ from his cell at the top of a Hogwarts™ tower that reaches beyond the clouds, before swooping back down to safety on the back of Buckbeak™!

With the LEGO® Harry Potter™ Hogwarts™ Courtyard: Sirius’s Rescue playset, young wizards, witches and Muggles aged 8 and above can recreate an iconic scene from Harry Potter and the Prisoner of Azkaban™ this Christmas. 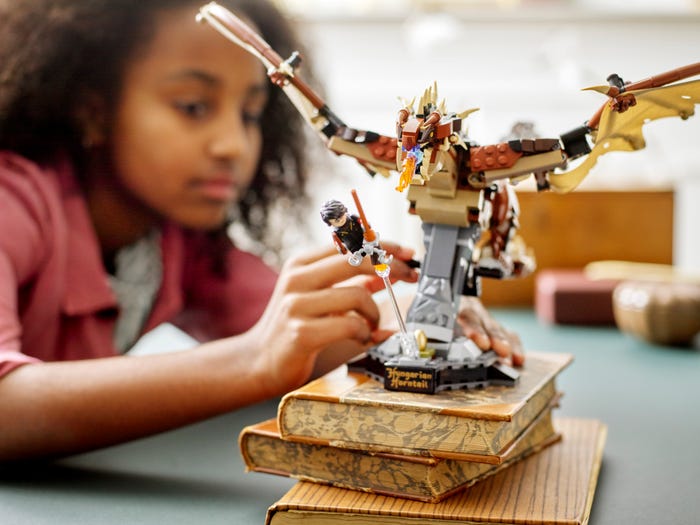 Danger awaits LEGO Harry Potter fans this Christmas with this realistic, moving model of one of the most fearsome creatures in the Wizarding World: the Hungarian Horntail!

With moving wings that flap up and down at the turn of a lever, this formidable fire-breather’s jointed wings stretch out to over 15 in. (40 cm), making the LEGO® Harry Potter™ Hungarian Horntail Dragon a striking collectible figure to build and display alongside a Harry Potter minifigure astride his broomstick. 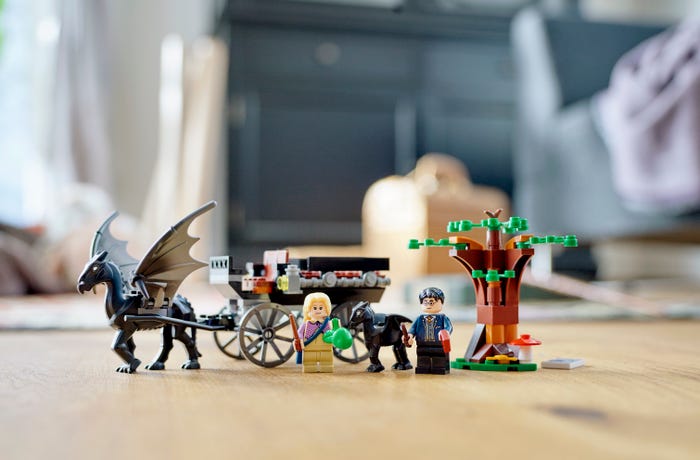 With the LEGO® Harry Potter™ Hogwarts™ Carriage and Thestrals set, kids can take Harry Potter and Luna Lovegood™ on an other-worldly adventure this Christmas to befriend a hungry adult and baby Thestral, a magical creature that lives amongst the trees!

Roleplaying with the minifigures, they can hitch the adult Thestral to a carriage and take to the skies for their next adventure!

These LEGO Harry Potter sets are sure to bring the magic of Christmas to anyone who receives them as a gift! If you’re looking for additional sets to make this festive season even more special, make sure you check out the toys in other themes – you’re bound to find something to appeal to every interest!