Track down the Jedi in the advanced LEGO® Star Wars Sith Infiltrator. Given to him by his master Darth Sidious, Darth Maul's personal starship has everything needed to carry out the Dark Lord's bidding, including retractable landing gear, folding wings, opening cockpit with space for a minifigure and 2 front or rear-loading spring-loaded shooters. After you've released the Droid probes and located the enemy, jump on the detachable Sith Speeder to intercept. With the power of the Sith on your side, you are more than a match for any Jedi Master! Includes 4 minifigures with assorted weapons: Darth Maul, Qui-Gon Jinn, young Anakin Skywalker and Watto, plus R2-D2. 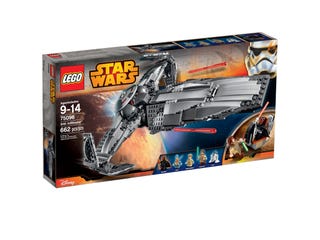 Some exclusions apply. Visit our Deliveries and Returns page for more information.
Overall RatingAverage rating3.8out of 5 stars
3.8
(15 Reviews)
67% would recommend this product.