Take LEGO® NEXO KNIGHTS™ role-play to a whole new level and transform into Aaron Fox by using the 2-in-1 Aero-Striker V2 as a crossbow, and pull the trigger to shoot the dual spring-loaded shooters. Then stage an aerial battle between the knight and the winged Ash Attacker with the Aero-Striker V2, which also features an ejectable arrow-shaped flyer, crossbow shooters and 2 scannable shields. Includes 3 minifigures. 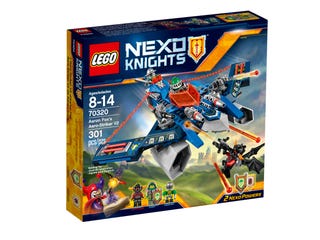