Discover the architectural secrets of Frank Lloyd Wright’s Solomon R. Guggenheim Museum®. This accurately detailed LEGO® model faithfully recreates the curves and distinctive lines that have made this building an architectural icon for the last half-century. The simple, grid-patterned facade of the annex tower complements the main building with its circular rotundas, while buildable exterior elements depict a section of New York City’s 5th Avenue Museum Mile, complete with its signature yellow cabs. The Guggenheim sign, featuring Wright’s architectural lettering, has also been recreated in a similar typeface to heighten the authenticity of the model. This LEGO Architecture model has been designed to deliver a rewarding building experience for all with an interest in architecture, travel, history and design, and is suitable for display in the home and office. 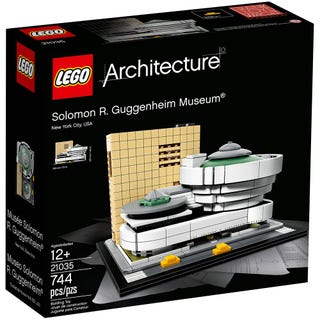