Recreate epic scenes from Star Wars: The Force Awakens, as Han Solo and Chewbacca try to escape the clutches of Bala-Tik and his Guavian Security Soldiers aboard their freighter. Featuring a modular design for easy reconfiguration, the freighter sections contain authentic details like a lowering blast door, trapdoor and crawlspace in which to hide. Pull the correct fuse to release the 2 buildable Rathtar figures with posable tentacles and teeth, then rearrange the sections and play out another Rathtar escape! This great set includes 5 minifigures. 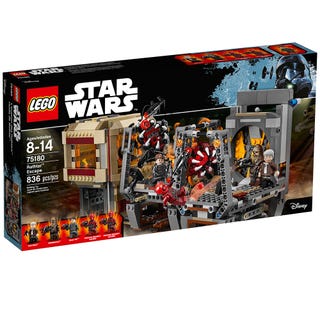