Launch into battle against the shark army and pretend to walk on water and climb walls with this awesome THE LEGO® NINJAGO® MOVIE™ mech. The Water Strider features a 360-degree rotating minifigure cockpit, 6-stud rapid shooter and 4 posable legs and feet to create powerful battle poses. The set also includes 4 minifigures with assorted weapons to add to the ninja vs. shark army role-play battle options. 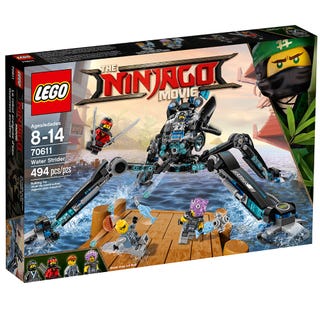