Pitch Monstrox against Merlok 2.0 and Clay in their highly posable mech in this LEGO® NEXO KNIGHTS™ 72004 Tech Wizard Showdown, featuring a cockpit for Clay’s battle suit, buildable sword, 6-stud rapid shooter, Combo NEXO POWER shield and a detachable Merlok 2.0 hologram figure attached to a flyer with a sword and shield holder. The Monstrox hologram is on a critter base with 4 legs and 2 critter shooters. This cool toy for kids includes 2 minifigures, a CyberByter figure and 3 scannable shields. 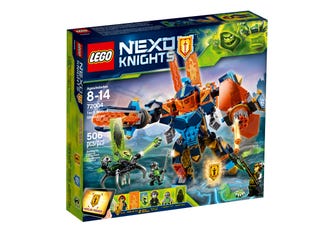