Lead a high-speed chase for the coaxium with this LEGO® Star Wars 75215 Cloud-Rider Swoop Bikes set. Featuring LEGO brick versions of Enfys Nest and Weazel’s speeders from Solo: A Star Wars Story, each is equipped with an open minifigure cockpit and 2 stud shooters that are perfect for playing out action-packed LEGO minifigure battles! 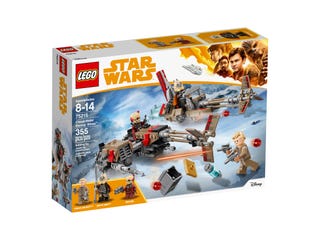