Make room to display the most famous starship in the galaxy!

Construct one of the biggest LEGO® sets ever made.

Features two crews, so you can display the classic or new films.

Go inside for more adventure!

Removable hull panels put you right in the action.

Over 7,500 pieces make for a fun and challenging build.

True to the saga.

Booklet includes information on the designers and behind the scenes facts about this remarkable set.

Welcome to the largest, most detailed LEGO® Star Wars Millennium Falcon model we’ve ever created—in fact, with 7,500 pieces it’s one of our biggest LEGO models, period! This amazing LEGO interpretation of Han Solo’s unforgettable Corellian freighter has all the details that Star Wars fans of any age could wish for, including intricate exterior detailing, upper and lower quad laser cannons, landing legs, lowering boarding ramp and a 4-minifigure cockpit with detachable canopy. Remove individual hull plates to reveal the highly detailed main hold, rear compartment and gunnery station. This amazing model also features interchangeable sensor dishes and crew, so you decide whether to play out classic LEGO Star Wars adventures with Han, Leia, Chewbacca and C-3PO, or enter the world of Episode VII and VIII with older Han, Rey, Finn and BB-8! 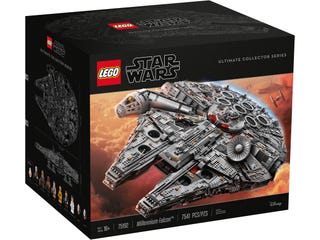 Some exclusions apply. Visit our Deliveries and Returns page for more information.
Overall RatingAverage rating4.7out of 5 stars
4.7
(449 Reviews)
94% would recommend this product.