The monstrous—but comical—Lava Smasher is racing against NEXO KNIGHT Aaron Fox to retrieve the Book of Chaos. Show off daring aerial moves on Aaron Fox's hovershield, dart the knight in and out of the movable rock fists and dodge the catapult's rocks. There are plenty of thrilling scenarios to play out in this action-packed play set. Includes 2 minifigures: Moltor and Aaron Fox. 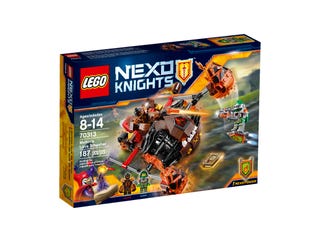