The only Elemental Beast in the 2016 LEGO® BIONICLE® series that can fly, this buildable Lava Beast features 2 lava-crystal-like wings and slicing lava blades. Turn the wheel to activate the rotating torso for fast-action combat scenes, but avoid the enemy's strikes to the jaw that will pop off the beast's mask. Power up by popping off the Beast Mask of Corruption and add the corrupted Unity Mask of Tahu to gain the edge in battle. 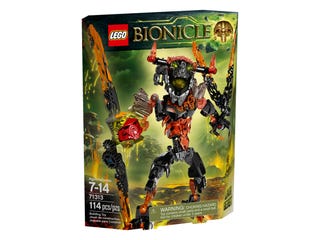