Call in weaponized support with the First Order Snowspeeder™! With a crew of three, this rapid response vehicle features a forward storage compartment, fixed stud shooter in the cockpit, two rapid-fire stud shooters built into the engines and transparent wheels hidden out of site for a true ‘hover’ look. Now you can recreate your own great scenes from Star Wars™: The Force Awakens. Includes 3 minifigures with assorted weapons: 2 First Order Snowtroopers and a First Order Snowtrooper Officer. 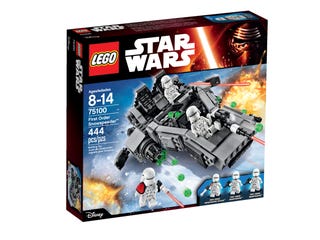