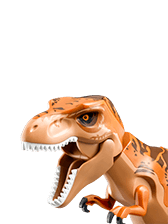 A carnivorous dinosaur from the late Cretaceous Period of North America about 65 million years ago, the gigantic Tyrannosaurus rex has well earned its reputation as the “tyrant lizard king.” Its two-fingered hands and arms may look almost comically small, but its massive jaws and strong, serrated teeth make it a true prehistoric force to be reckoned with.