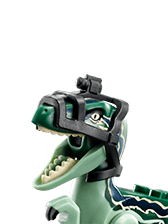 In the late Cretaceous Period, the Velociraptor excelled at hunting with its keen senses, large brain, and the retractable sickle claw on each foot – and no creature in Jurassic World demonstrates this better than Blue, the leader and oldest member of the raptor pack. Larger, smarter and more cunning than the rest, she insists on eating first…which is why Owen feeds her last so she remembers he’s in charge. DNA from a Black-Throated African Monitor Lizard provides her distinctive pattern of scales, which reflect an iridescent blue color.