With the knights far, far away, King Halbert is left to defend the castle by himself. Luckily, soon-to-be-knighted page Robin Underwood has created the King's Mech, so King Halbert can hold up Jestro's monstrous army until the knights return and join the battle. Includes 3 minifigures: King Halbert, King's Bot and Flamethrower. 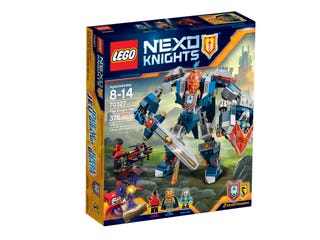