Launch an attack on the Stone Army warriors' base camp with Cole RX's Rock Roader, featuring large rubber offroader wheels with full suspension, a 6-stud rapid shooter, spinning driller and Lil' Nelson's detachable turret with golden swords. The base camp has a disc shooter and the 2 Stone Army warriors are equipped with an Elemental Blade and stud-shooting crossbow to boost the battle role-play options. Includes 4 minifigures. 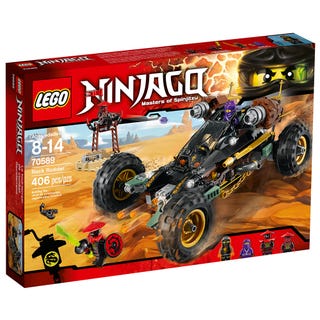