The knights have found the Book of Revenge and must protect the magic spell book in Merlok's Library 2.0. Stop the Crust Smasher from stealing it for Jestro. Shoot The Flame Bat out of the sky with the disc shooter before it hits the hologram banner element and releases the spell book. Includes 3 minifigures: Lance Richmond, Ava Prentis and Crust Smasher. 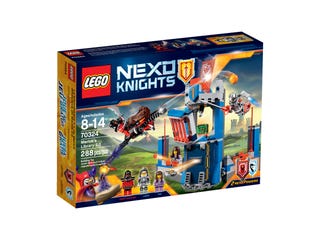