Mini builds, maximum fun
There are 7 LEGO minifigures/figures/droids in this holiday calendar: The Mandalorian and the Child (Grogu), affectionately known as Baby Yoda, both in festive outfits, plus a Scout Trooper, Stormtrooper, Tusken Raider, IG-11 and IT-O Interrogator Droid. Children will also love building and playing with mini builds such as The Razor Crest, TIE Fighter, Tusken ballista snow launcher, training targets and the Child’s hoverpram. 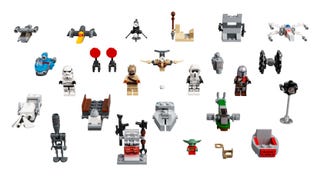 3.4
Please note that by submitting a helpfulness vote on a review your IP address is collected and stored by our trusted third party service provider for the sole purpose of preventing multiple entries from the same IP address. To see how to control your personal data, please see our Privacy policy.