Let the battle commence against the Parademons with this LEGO® DC Super Heroes 853744 Knightmare Batman™ Accessory Set. This cool toy for kids features Batman’s turret with 2 stud shooters and 3 minifigures with assorted weapons, including the new-for-September-2018 Knightmare Batman minifigure and his rifle with an attachable LEGO tile of The Joker's face. 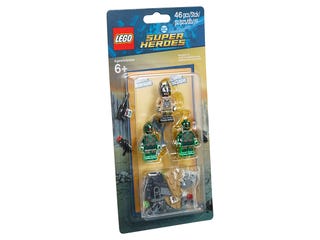 Some exclusions apply. Visit our Deliveries and Returns page for more information.
Overall RatingAverage rating4.3out of 5 stars
4.3
(6 Reviews)
100% would recommend this product.