Travel to the LEGO® Friends Heartlake Performance School in the iconic yellow school bus with opening doors and removable roof. Use the opening lockers to store school stuff then head to the classroom, canteen or studio—the musical instruments can all be removed to create a performance space with viewing bench and rotating speaker outside. Includes Andrea, Noah and Iva mini-doll figures. 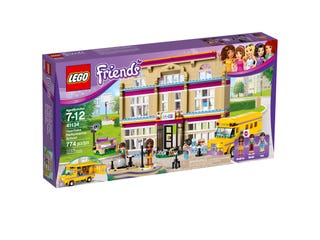 2.4
Please note that by submitting a helpfulness vote on a review your IP address is collected and stored by our trusted third party service provider for the sole purpose of preventing multiple entries from the same IP address. To see how to control your personal data, please see our Privacy policy.