Brace the hunters for a fierce LEGO® Jurassic World™ 75931 Dilophosaurus Outpost Attack in this fun play set. Step down from the lookout tower and crane, featuring exploding gate and wall functions, crate and baby Dilophosaurus, and use the tranquilizer gun to stop the Dilophosaurus breaking through the fences. This Jurassic World toy set includes 3 minifigures, a Dilophosaurus figure plus a baby dinosaur element. 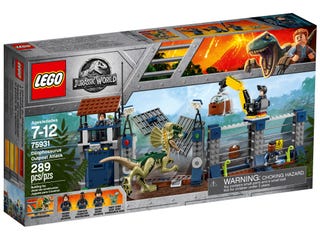 3.0
Please note that by submitting a helpfulness vote on a review your IP address is collected and stored by our trusted third party service provider for the sole purpose of preventing multiple entries from the same IP address. To see how to control your personal data, please see our Privacy policy.