Green is for go in this drag racing set featuring LEGO® Speed Champions versions of the iconic 1969 and 2016 Chevrolet Camaro cars and a functioning start/finish line. Switch the ‘lights' from red to green to begin the race. With 2 Chevrolet Racing driver minifigures plus a race official with the checkered flag and a trophy for the winner, there's everything needed to role-play a classic vs. modern drag strip racing event. Includes 3 minifigures: 2 Chevrolet Racing drivers and a race official. 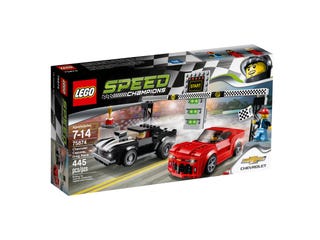