Smash through the gates of Ra's al Ghul's headquarters in Desert Batman's Buggy. Fire the Buggy's stud shooters and play out sword battle scenes against the villains, then create an explosion effect by pushing the cell door's lever to release Robin™ in this detailed set, featuring a winding staircase, Lazarus Pit catapult and a lever-operated swinging axe trap. Includes 4 minifigures. 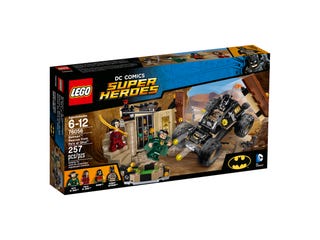