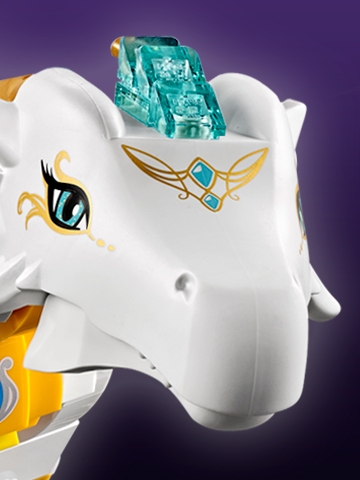 Queen of dragons. Like Emily, she doesn’t belong to a specific element. Instead she is the gathering force among all dragons. She is the largest dragon, mother and queen to most of her kind. Though Elandra shares an unbreakable bond with all her dragon kin, she has never bonded with an elf before. Her new friendship with Emily can make her as silly as a puppy sometimes. Only shortly though, as she will catch herself being so unguarded, brush it off and regain her majestic composure. Powers: Love, and uniting all magic Strengths: She is extremely wise, confident, calm and has no need for showing off. Flaws: Her powers can weaken if she is separated from her loved ones. Skills: Sees everyone for who they are and brings out the best in them. Favorite things: When everyone she loves is safe and cared for. Did you know: She has an amulet similar to Emily’s.