When designer John Pasche began sketching a tiny tongue and lips in April 1970, he imagined it could be used as the band’s letterhead, or something to print onto their next 45 rpm single.

Little did he know it was eventually going to become the most famous logo in rock‘n’roll history.

Over the course of the next 50 years, he’d see his sketch copied, redrawn and reimagined countless times, reprinted on t-shirts, lighters, mugs, caps and a lot more.

To celebrate the legacy of the Rolling Stones, we’ve released a brand-new LEGO® Art set of the iconic logo, so fans can relive their favorite memories from the band’s illustrious career.

Once built, the new LEGO Art set can be hung on your wall as a tribute to one of the greatest rock bands of all time... and a logo that continues to stand the test of time...

A logo that never dies

It could be argued that the Rolling Stones logo is more recognizable than the band itself, transcending the musical icons it represents and taking on a fame of its very own as a symbol of a new anti-establishment era in music, culture, fashion, art and pop culture.

Even today, the power of the Rolling Stones hot lips logo is well known amongst old and young generations alike, who instantly recognize the logo and what it stands for. 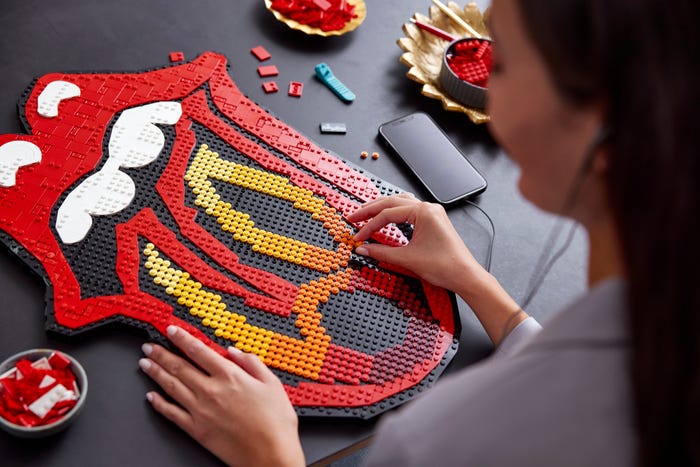 The logo quickly became synonymous with the band after the release of the classic ‘Sticky Fingers’ album in April 1971, marking its first public appearance. It was used on the back cover, on the label and, most prominently, on the insert. From then, it has remained an icon of the band.

“Well that’s the basis of it really. I felt that it just kind of worked for the band,” said logo designer John Pasche.

“I think it’s the way that kids sort of stick their tongue out at people. It’s an attitude really, I think, which kind of suited them. It just worked for them, it just felt right when I did it. It was done in a 1970s kind of way. It’s sort of luscious, it’s quite soft, it’s quite feminine. It’s a soft protest in a way.”

The logo has appeared on every Rolling Stones album since, with unique versions of it having been created over the years for special releases and appearances. It’s become representative of the band’s style, scenography and merchandise.

“It represents the lead singer, it represents the whole band, and it can be endlessly adapted as we’re seeing again now, right, with the new version of it for the 60th tour, which is brilliant – it just looks fantastic. It’s historic and traditional but it looks brand new at the same time,” said John.

Now, it’s been turned into a LEGO® Art set that Rolling Stones fans can display at home with pride. It’s a celebration of six decades of the band and encapsulates the spirit of rock‘n’roll and creative rebellion.

Inspiration for an icon 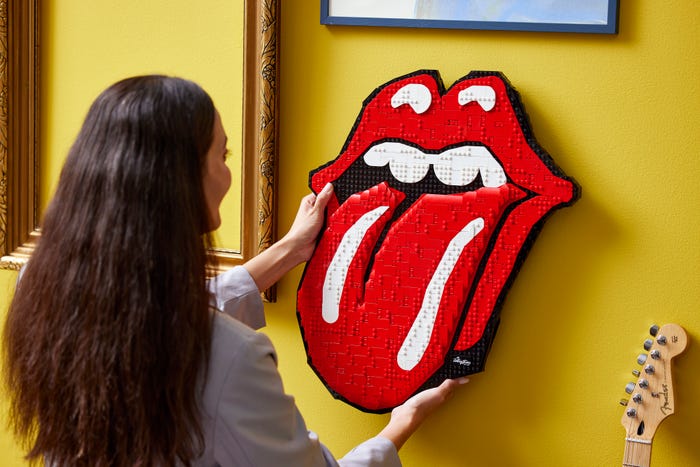 So where did the hot lips idea come from? Back when he was a young art student, the band presented John with an image of the Hindu goddess Kali – who is often portrayed with her tongue sticking out – as inspiration with which to create the Rolling Stones logo.

He of course opted for a version that was sleek, stylish and fittingly defiant, but the inspiration for his version came from other corners of pop culture too.

“A lot of the inspiration came from the pop art exhibitions I went to see, people like [Andy] Warhol and [Roy] Lichtenstein. It was their boldness and interest in commodities rather than straight still life or paintings. It was very kind of brash art, hit-you-in-the-face stuff that was a huge influence.” 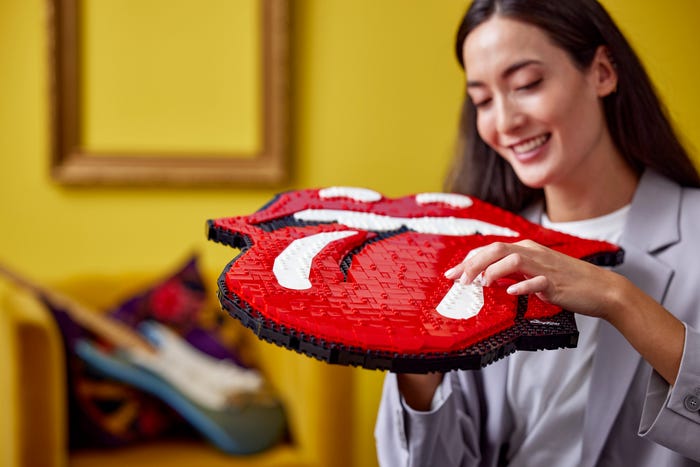 What does the Rolling Stones logo mean?

The red tongue and lips represent free expression, the raw essence of rock‘n’roll, empowerment – and of course, the everlasting legacy of the Rolling Stones.

So, what better way for fans to pay tribute to a such an icon by building the LEGO® Art Rolling Stones set?

“Who would have believed 50-odd years ago that this design would be made into a LEGO piece...[they’ve] just done a brilliant job,” continues John.

Which of course was music to the ears of our LEGO designers – Fiorella Groves and Annemette Baaskjær Nielsen – who worked tirelessly to recreate the new LEGO Art Rolling Stones set as accurately as possible, making sure they did justice to John Pasche’s original illustration.

All you need to do now is find the perfect place to display your own piece of rock‘n’roll art history. For more about the Rolling Stones, listen to the full soundtrack here.