The chase is on! A mighty T. rex has broken loose and it must be captured before it harms anyone. Team up with the ACU troopers in the T. rex Tracker to pursue the ferocious creature. Drive the motorcycle to distract the T. rex, swerving clear of its powerful jaws. Meanwhile, lay out the dino cage as a trap and prepare to fire the mobile research module’s harpoon-style trap shooter. You’ve only got one shot to take down the beast, so make it count! Includes 3 minifigures with assorted weapons and accessories: an ACU trooper, Hoskins and a vet. 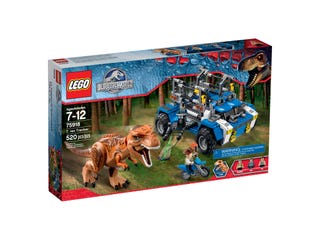