FREE delivery on all orders above $199!Learn more

FREE delivery on all orders above $199!Learn more

Limit 15
Warning!
Choking Hazard.
Small parts.
Building Instructions
8+Ages
404Pieces
400
VIP Points
421054210542105Item
Kids can recreate the thrill of boat racing with this super-cool LEGO® Technic™ (42105) Catamaran toy. For the first time ever, this LEGO Technic model toy floats on water! So, sailing enthusiasts can learn while they play. See how the sails work. Or how the dagger boards maximise stability and how the rudder steers. With the classic 2-hull catamaran design, this model boat is a fantastic recreation of the real thing. Learn how to build and sail an awesome toy boat Build… rebuild… play… display... There’s so much for kids to discover with this LEGO engineering toy. Have fun building the Catamaran – inspired by real race boats. Then set it in the bathtub to recreate speed sailing adventures before rebuilding into a Race Power Boat. If you're looking for toy boats that really float, this set is a great choice. Unique toys and immersive building experiences LEGO Technic sets are ideal for LEGO fans looking for a new challenge. They offer an advanced building experience for kids and adults who enjoy learning new engineering skills – or simply love to build. 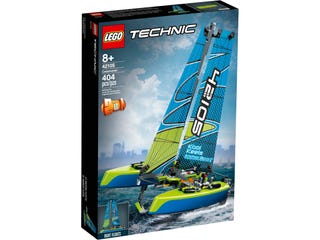 Overall RatingAverage rating3.4out of 5 stars
3.4
(15 Reviews)
60% would recommend this product.