Choose your gift with purchases over 40 €*

The LEGO® DUPLO® Cargo Train is now even easier for your toddler to control and interact with in multiple ways. Young children can become the train driver with the Push & Go motor — a gentle push either forwards or backwards sends the train on its way and a firm hold or lift off the tracks will make it stop. Help them place the 5 colored action bricks along the track to sound the horn, turn the lights on and off, pause and refuel, change direction and stop the train wherever they like. With a harbor, boat, café, loading station, 2 cranes, 3 DUPLO figures plus an animal figure and lots of cool track pieces included in this LEGO DUPLO set, preschoolers can enjoy classic, fun train play. Download the optional app to unlock even more play possibilities, including remote-control function and fun activities to complete with your toddler! 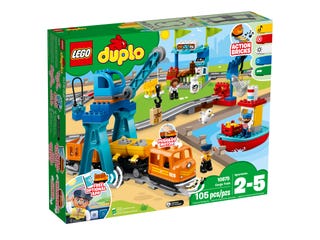