An interview with AFOL Bre

My name is Bre (she/her) and I’ve been a LEGO® fan my whole life. I received my first LEGO sets (Adventurers) when I was in early elementary school. When I came into my high school years, my parents stopped buying me LEGO sets as gifts and sort of tried to get me to get rid of my collection because it “was for kids”. But I certainly don’t blame them. Nobody I knew played with LEGO bricks anymore, and almost every waking moment of mine was dedicated to sports. It was as close to a ‘dark age’ as I ever had. When I was recruited to college on an athletic scholarship in track and field, I met my now wife, Jessie. Her parents had NOT stopped buying her LEGO sets and she had amassed a significant collection. In fact, somehow, she had accidently/secretly acquired a second dorm room that she used as her LEGO room.<br> 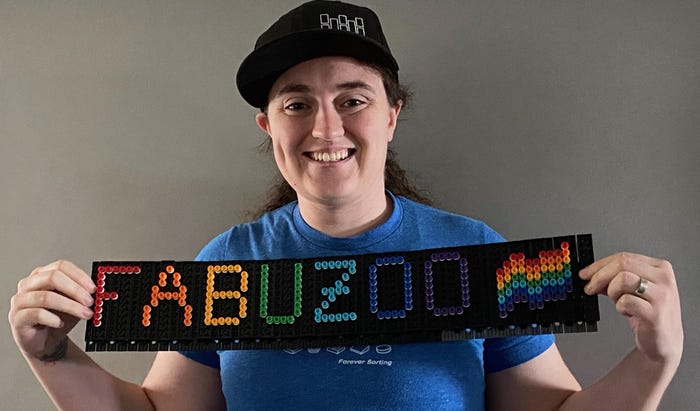 After I graduated in 2015 with a degree in zoology, my wife and I moved to another city. I was working on getting my foot in the door at a zoo and needed a transition between jobs, so I decided to think totally outside the box. I went to work for LEGO Brand Retail as a Brick Specialist. That is where I met a good friend who introduced us to the AFOL (Adult Fans of LEGO) community. We had absolutely no clue this world existed. We started attending meetings and went to BrickCon. Then during the following year I took a deep dive into the community. We opened a tiny Bricklink store and started using that to fund our hobby and as our handle for displaying MOCs (My Own Creations). I became a Contributor for The Brothers Brick and the Volunteer Coordinator for BrickCon. Additionally, we joined a handful of other LUGs (LEGO User Groups) and were core founding members of FabuLUG, a club for LGBTQIA+ AFOLs that is quickly gaining popularity, even internationally.

Tell us about the AFOL LGBTQIA+ community. What have you gained from being part of the group?

One thing we learned when joining our AFOL community was that there were TONS of AFOLs out there, and even more surprising to us, there were lots of highly involved LGBTQIA+ AFOLs out there too. In fact, our city is such an inviting and accepting place for the LGBTQIA+ community that there were many LGBTQIA+ AFOLs in leadership roles within our LUG and on BrickCon’s staff. Additionally, just about everyone in our AFOL group who isn’t LGBTQIA+ treats us exactly the same as everyone else. We have been blessed to fit in so seamlessly. This is our family.

What role do you believe companies can play when it comes to supporting the LGBTQIA+ community?

Every large company has a platform for shaping social change and opinion. As one of the largest and most popular companies in the entire world, LEGO has an incredibly meaningful role to play in supporting LGBTQIA+ people. The company’s support tells the whole world that everyone belongs, no matter who they are, who they love, or what color their skin is.

How do you use creativity as a tool for self-expression?

I’m naturally a person who find creativity to be a big part of who I am. I enjoy writing, making art, playing and listening to music and, of course, building with LEGO bricks. The things I build are part of me and tell others who I am and what inspires me.<br> 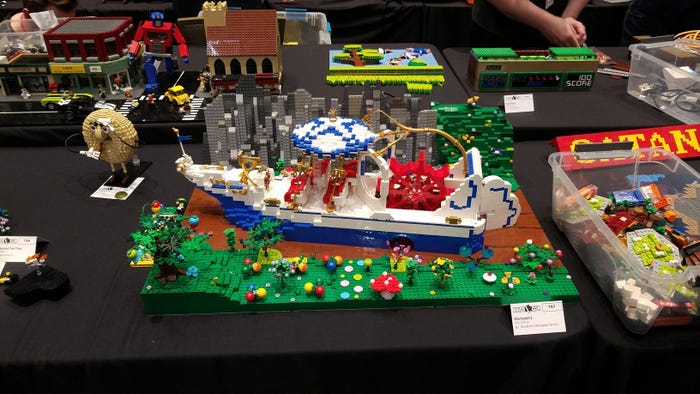 How and where are you celebrating Pride Month this year? What does Pride Month mean to you?

In the past, we have traditionally celebrated Pride on the streets of our town. The annual parade is a mecca for LGBTQIA+ individuals from all over the world. Unfortunately, COVID ruined the fun a bit. We’re not sure how we’re going to celebrate this year. But Pride is still important, and we appreciate the love and camaraderie shared by all. We might have a FabuLUG Zoom call, or a very small gathering to celebrate. We’ll see!

An interview with AFOL Grace

An interview with AFOL Erik

An interview with AFOL Bri

Meet AFOL Bri and learn what the AFOL LGBTQIA+ community means to her.