Pythor and the Anacondrai have returned to NINJAGO™ so the Ninja team must rush to the scene with the Ninja DB X to confront NINJAGO’s most fearsome enemy! Drive the powerful 6-wheel vehicle through the jungle and into battle at the Anacondrai gateway. Detach the Command Center to reveal the hidden dual spring-loaded shooter and open up the control room for easy play. Make battle plans in the hi-tech control area and choose your weapons and tools from the rack. Launch the flyer from the lookouttower with Nya and fire its stud shooters. Zoom into combat with Kai on his cool motorbike. You must defeat the Anacondrai warriors and escape from the island! Includes 6 minifigures with assorted weapons and accessories: Kai, Nya, Garmadon, Pythor, Kapau and Chop’rai. 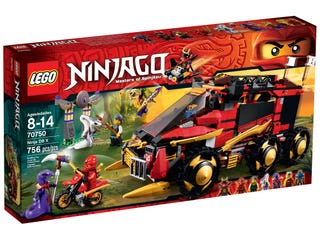