Back orders accepted, will be shipped by 11 December 2020

Limit 5
Shop more like this:
10+Ages
1292Pieces
750
VIP Points
421084210842108Item
An action-packed set for crane toy fans. Anyone who loves discovering how mega-machines work will have lots of fun with this LEGO® Technic™ 42108 Mobile Crane. It’s a challenging build, perfect for LEGO Technic fans looking for a model packed with functionality. A feature-packed crane truck for construction site fun With its classic black and yellow design, this model looks just like the real thing. And with a mighty range of realistic features, it operates just like a real crane too. First, steer and drive the vehicle to the right spot. Then use the outriggers to secure the crane in place. From the crane cabin, raise the boom and extend the telescopic arm – see how high it reaches! Then use the hoist to carry the concrete pillar – great for role-play, or just for testing what this mega-crane can do. An immersive and rewarding construction site toy This is a challenging and advanced build from the LEGO Technic universe, bringing the world of engineering to life.
Building Instructions 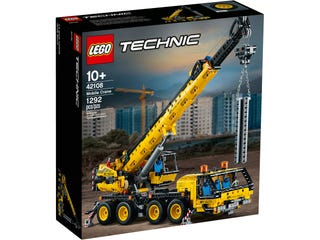 Some exclusions apply. Visit our Deliveries and Returns page for more information.
Overall RatingAverage rating4.8out of 5 stars
4.8
(19 Reviews)
100% would recommend this product.