Rinona has been captured by the Mammoth tribe and imprisoned in the awesome Frozen Stronghold. Rush to rescue her with Rogon in his powerful Rhino Roller, but beware—the Mammoths are well-equipped to defend their icy fortress. Evade blasts from the trunk’s stud shooters and the rotating disc shooter. When the Mammoth Tusk Flipper is launched, swerve clear before Maula can activate the flipping function to tip the Rhino Roller over. Once inside the stronghold, grab the precious CHI crystal, release Rinona from the frozen prison turret and then make your escape! Includes 5 minifigures with assorted weapons and an accessory: Rinona, Maula, Mottrot, Vardy and Rogon. 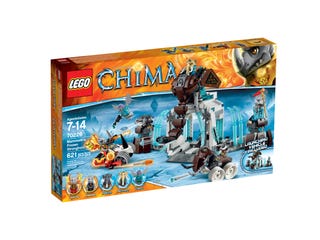