The evil ice hunters have captured King Crominus so team up with the Croc and Lion tribes to rescue him. Place Cragger in the opening cockpit of his massive Fire Helicroctor, spin the rotors and launch into the sky! Swoop down to pick up Laval’s Fire Tracker and pursue the Saber-tooth and Ice Bear warriors. Target the enemy with the flick missiles and activate the quick-release to drop Laval’s vehicle into battle. Aim the Fire Tracker’s disc shooters at the ice hunters and save the Croc king from the ice trap! Includes 6 minifigures with assorted weapons and accessories: Cragger, Laval, King Crominus, Strainor, Saraw and Icepaw. 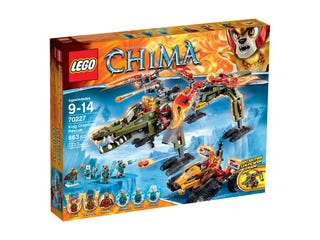