As the Battle of Naboo rages on, bring the Naboo security forces and their Gungan ally Captain Tarpals into the action with the maneuverable LEGO® Star Wars™ Flash Speeder. This modified landspeeder has an open cockpit with space for a driver and 3 minifigure passengers, as well as opening storage compartments. When the battle really heats up, man the rotating, spring-loaded shooter at the back and fend off the Battle Droid forces. There are even 2 extra spring-loaded shooters built into the side-mounted engines for extra firepower! Includes 3 minifigures with assorted weapons and an accessory: Naboo Security Guard, Naboo Security Officer and Captain Tarpals, plus 2 Battle Droids. 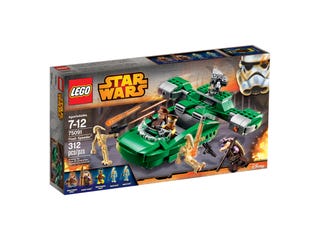