The Stormtrooper on his speeder bike is hot on the heels of Ezra. But on his own customized speeder bike, the young rebel has a surprise in store! As they round a corner, Ezra slams on the brakes and sends his pursuer shooting past… right into the path of Sabine armed with her pistols! Will the Stormtrooper be forced to hand over his speeder bike to those pesky rebels? Play out your own ending to this fun story inspired by the Star Wars: Rebels animated TV series. Includes 3 minifigures with assorted weapons: Ezra Bridger, Sabine Wren and a Stormtrooper. 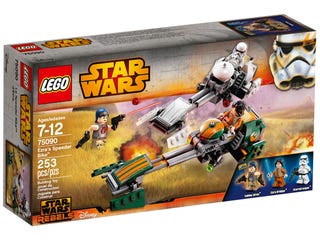