Help Batgirl™ and Robin™ thwart a jewel heist in THE LEGO® BATMAN MOVIE: Catwoman™ Catcycle Chase set, including the Catcycle and a buildable street scene with a jewelry store. Play-starting features include a lamppost with tipping function to knock over during the getaway pursuit, translucent diamond-style elements, plus Catwoman's whip and Batgirl's Batarangs. Includes 3 minifigures. 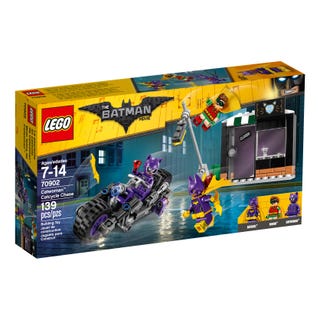