Bring in reinforcements at the Battle of Naboo with the LEGO® Star Wars Battle Droid Troop Carrier. Help the Pilot Battle Droids unload the racks of Battle Droids and detachable blaster racks before the Gungan Warrior has time to take aim and fire. As featured in Star Wars: Episode I The Phantom Menace, this detailed transporter also features a detachable driver compartment that can be attached at either end and hidden wheels to help it glide across the floor. Can the Gungans stop the Trade Federation talking over their home planet? Includes a Gungan Warrior minifigure with a weapon, plus 2 Pilot Battle Droids and 12 Battle Droids with weapons 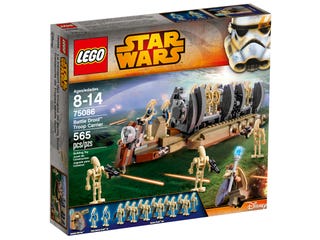