Young builders can reimagine classic moments from the Jurassic World movie with this Indominus rex vs. Ankylosaurus (75941) playset. The gyrosphere deployment station has an entrance turnstile and a trigger to launch a gyrosphere with a minifigure inside. And kids will love playing out LEGO® Jurassic World dinosaur battles with the Indominus rex and Ankylosaurus toy figures.

Role-play fun
There are 5 minifigures, including Owen Grady and Claire Dearing, for creative role play, and the trees in the buildable jungle scene can be knocked over with the Ankylosaurus’s swiping tail. A great gift idea for kids aged 8 and up, this building set comes with step-by-step instructions so even LEGO rookies can build confidently. 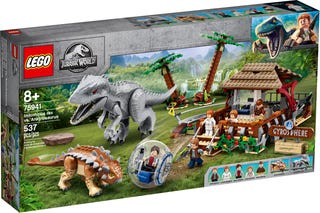