Grab your potion, ender pearl and enchanted bow, and prepare for the ultimate Minecraft™ encounter. Destroy the end crystal, defeat the enderman and slay the fireball-shooting ender dragon to win The End Battle! Enjoy hands-on Minecraft adventures with this LEGO® Minecraft set. Combine this model with other sets to create your own unique LEGO Minecraft universe. This set also includes a new-for-January-2019 dragon slayer minifigure and a code to redeem the skin in the Minecraft Bedrock Edition online game. 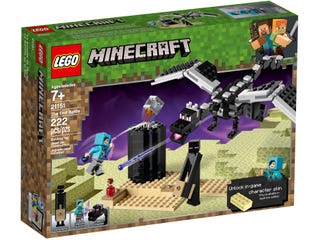