Celebrate Christmas in the Wizarding World with this magical LEGO® Harry Potter™ Advent Calendar (75981). Behind each of the 24 doors is a different toy or figure from the Harry Potter series. As the big day gets closer, kids can recreate Hogwarts™ holiday scenes – including the amazing Yule Ball!

LEGO Harry Potter and the Goblet of Fire™ sets
Kids can combine the 24 advent calendar gifts to recreate favorite scenes from the Harry Potter movies and role-play stories and adventures of their own. The calendar contains minifigures – including Harry Potter, Hermione Granger™, Ron Weasley™, Padma Patil, Parvati Patil and Cho Chang – and buildable models, such as a miniature Beauxbaton’s carriage and a dining table with ice-castle centerpiece. 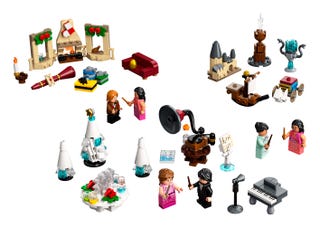 Some exclusions apply. Visit our Deliveries and Returns page for more information.
Overall RatingAverage rating3.2out of 5 stars
3.2
(29 Reviews)
55% would recommend this product.