When we released our first roller-coaster set, we had no idea that it would become so popular. It turns out, though, that people really love roller-coasters!

So, when it came to designing our newest roller-coaster set, our designers wanted to do something that we’ve never done before and create a set that they were certain would appeal to roller-coaster fans around the world.

The LEGO® Loop Coaster is bigger, faster and our most ambitious model of the year, but making a working roller-coaster presented our designers with a series of fascinating challenges... 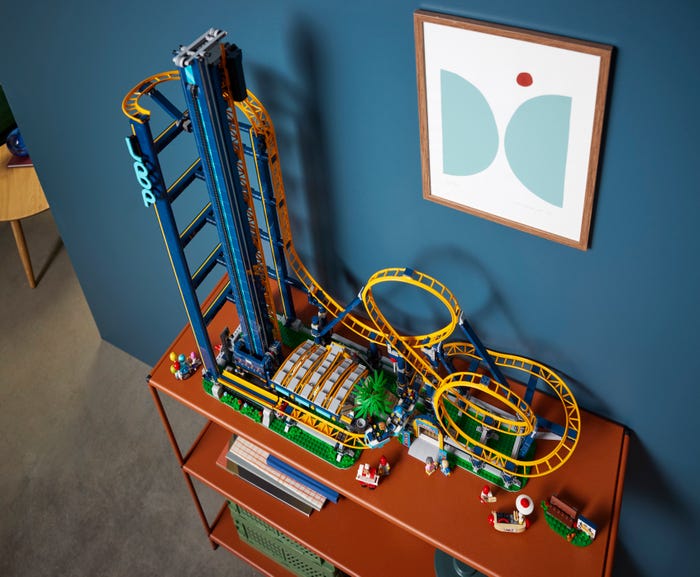 There are two things you’ll notice immediately about the new roller-coaster set. The first will be the two loops.

This is the first time we’ve used loops in a roller-coaster and this iconic feature was decided upon early in the design phase.

“We started building and we came quickly to the conclusion that we could do loops if we could have enough speed,” says Pierre Normandin, a lead designer on the new set. With his background designing for LEGO City and LEGO Icons, including designing several trains, he was the perfect person to lead on this set. But this set pushed his skills to new heights. 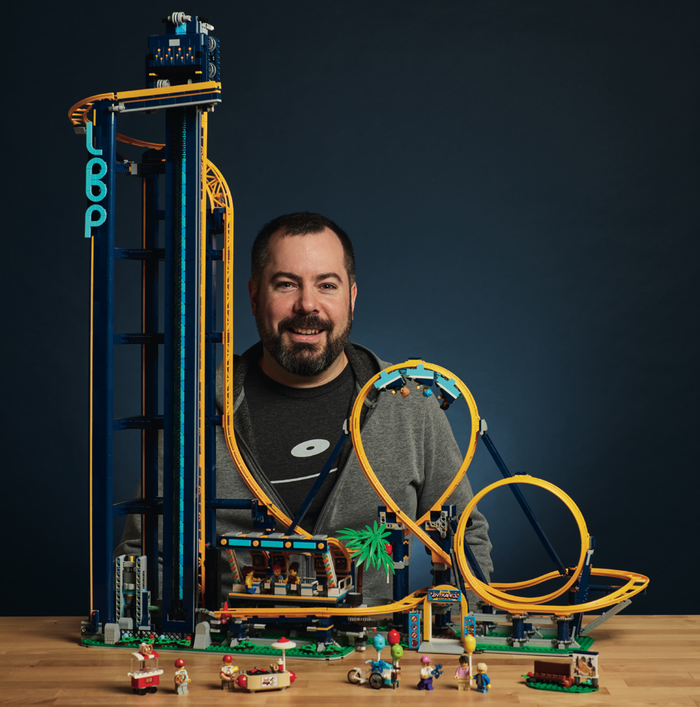 “While building LEGO models is different from the real world, it can be similar in many ways, and we realized early that there were many challenges regarding the physics of the roller-coaster.”

In order to get around the loops, the car must travel at a certain speed through the first loop in order to gather enough speed to get it around the second. But finding that perfect speed took a lot of trial and error.

The need for speed

Car speed is generated by gravity pulling the car towards the Earth; however, this speed is counteracted by the friction generated by the car interacting with the track and by an increased gravity pull when the car attempts to go upwards again at the start of a loop. 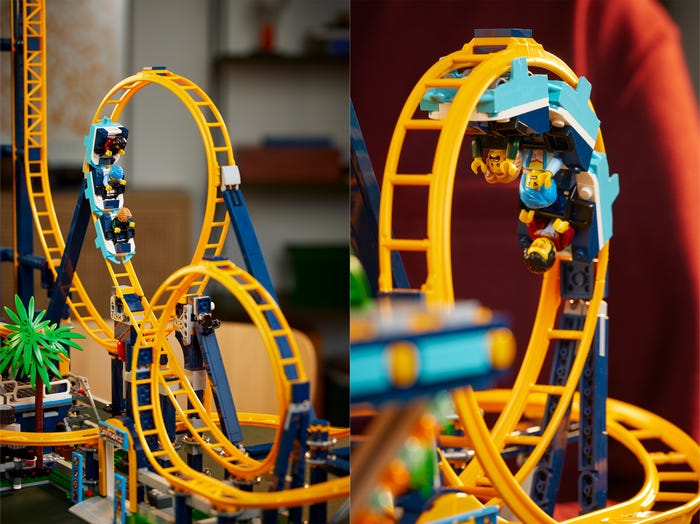 “A lot of times our biggest frustration was to see the train stopping right at the top of the loop!” says Pierre.

So, he needed to generate speed that would be greater than the friction of the track and the increased gravity of the loops.

Speed is generated by the height of the drop – the higher the drop, the greater the speed.

And so, we come on to the second thing you’ll notice about the set. It’s tall. Really tall!

At its highest point, this set measures 36 in. (92cm), making it one of the tallest sets we’ve ever produced. But the height generated a challenge of its own, and it’s another one that real-world roller-coaster designers often grapple with.

Once your car has sped through the track, how do you get it back to the top of its launch to begin the ride again?

An elevator to the top

See the roller-coaster in action!

“During the development and design process we need to look at all the options possible,” continues Pierre. “A ramp would have taken a huge hill and it was just not possible. The model would have been way too big!”

So, the decision was taken that the car would be raised with the help of a vertical elevator that saves on the space and gets the car into its drop position faster.

This elevator can be operated manually, or you can add in a motor and battery box (sold separately) that will do it for you.

Then, when the car sets off down the track, a carefully calibrated counterweight will smoothly lower the elevator naturally back down to its starting position.

A fun day out at the fair

Of course, when you go to a fairground, you’re not just going for roller-coasters, and Pierre has filled this set with fun, playful and authentic fairground details. 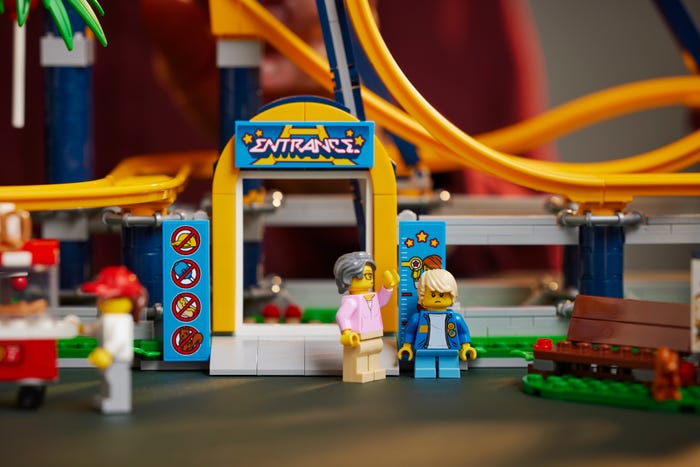 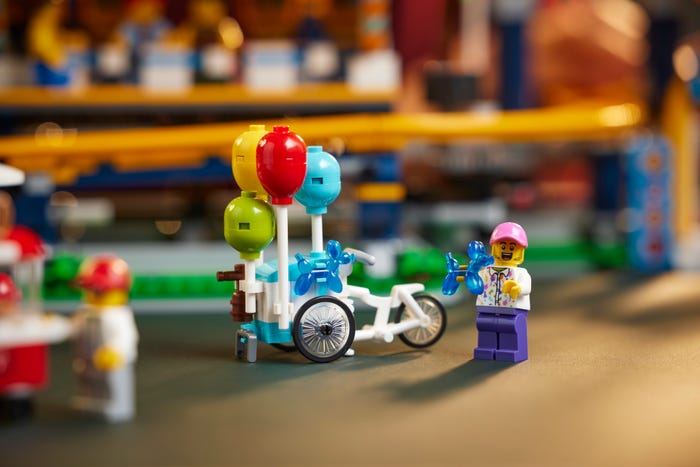 Your guests can grab a snack from the hot dog or pretzel store or buy a balloon from the balloon cart (Pierre’s particular favorite), and there’s even a height marker ensuring only minifigures that are tall enough can ride the roller-coaster. Speaking of minifigures, this set comes complete with 11 new ones, including six with reversible heads. 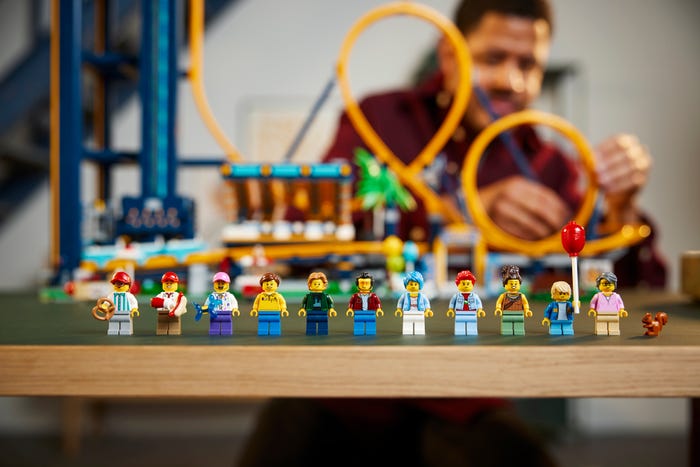 “You know, sometimes it’s the small things that just bring a bit more of a special feeling. The small bits are cool and they’re fun, and they’re not too challenging,” Pierre says with a smile.

After grappling with all that physics, it must have been nice to get back to having fun!