Kids love vehicles, and they’ll love these rebuildable LEGO® vehicle sets for when they really want to shift playtime into higher gears.

Whether they’re a fan of classic car models, want to get their hands on a cool construction vehicle or love the idea of a huge Viking ship, there’s something for everyone this Christmas! 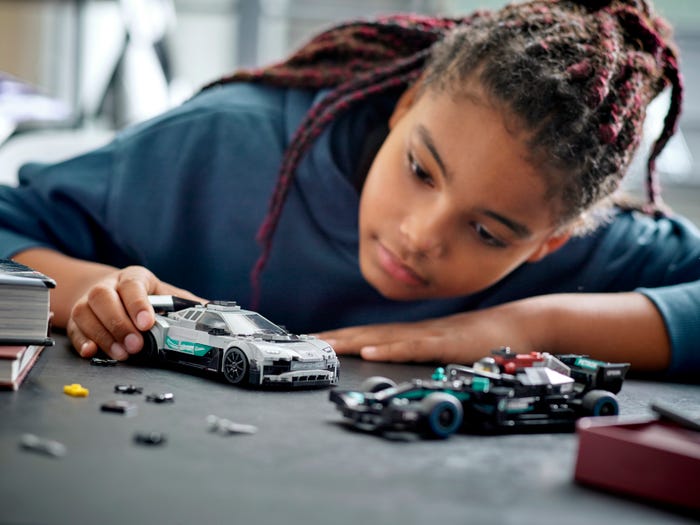 With details modeled faithfully on the original Mercedes designs, these LEGO recreations of 2 vehicles at the pinnacle of racecar performance will be adored by car enthusiasts and racing fans aged 9 and up.

The Speed Champions Mercedes-AMG F1 W12 E Performance & Mercedes-AMG Project One set includes 2 vehicles at the peak of engineering innovation for high-speed races with friends this Christmas! There’s 2 driver minifigures complete with racing helmets, wigs and wrenches so kids can imagine themselves right at the heart of the action! 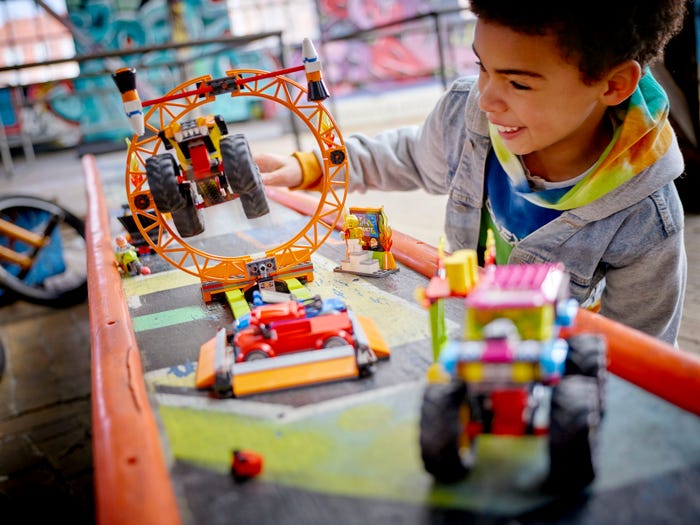 Bring the thrill of the stunt arena home with the ultimate dare-devil adventure set for kids!

With a flywheel-powered stunt bike, 2 monster trucks and 2 cars with collapsible roofs, this set has everything kids need to take on the ring of fire and wow the audience with thrilling launch ramp tricks!

There are also 6 minifigures, a hotdog stand, a podium, and so much more for endless hours of fun for 6 year-olds and above.

LEGO® Creator 3in1 Viking Ship and the Midgard Serpent 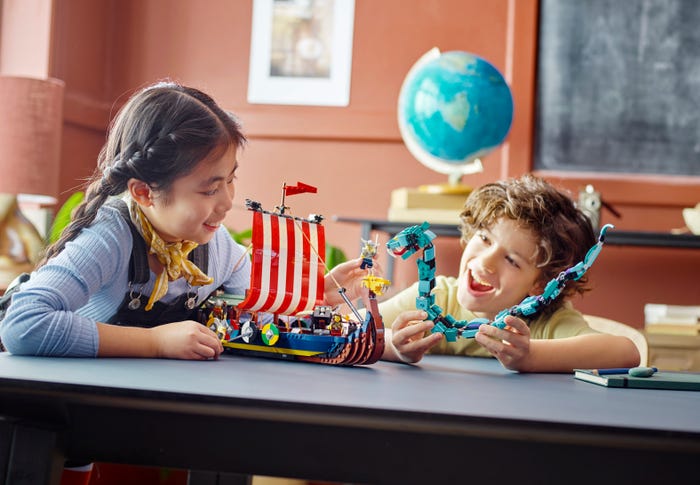 Kids aged 9 and up can set sail on a Viking adventure this Christmas with the LEGO® Creator 3in1 Viking Ship and the Midgard Serpent!

Vehicle fans and kids passionate about history will have endless hours of fun with this 1,192 piece set that can be rebuilt into 3 different models: a Viking ship defending itself against a Midgard serpent, a Viking house with a dragon soaring above or a Nordic wolf fighting off 4 Vikings! 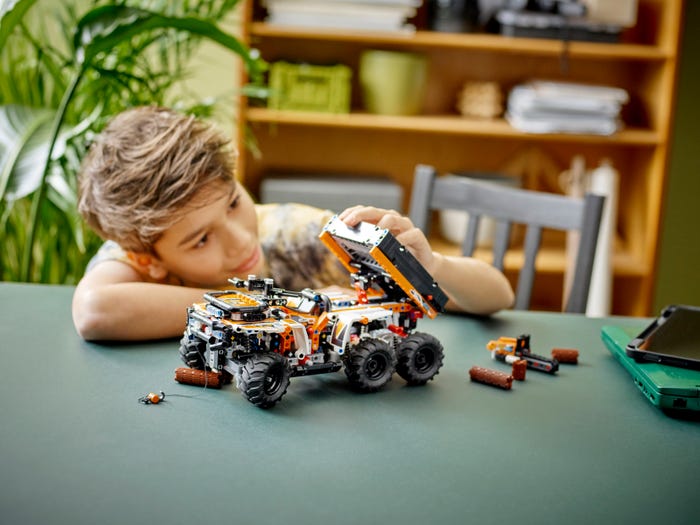 Introduce kids to the exciting world of construction and engineering this Christmas with the LEGO® Technic™ All-Terrain Vehicle. Including realistic mechanisms like the engine’s moving pistons and a winch that tips the cargo bed to load up logs for transportation, this playset comes with tons of cool features!

Kids can even customize their ATV model with fun graphic stickers to make this gift their own! 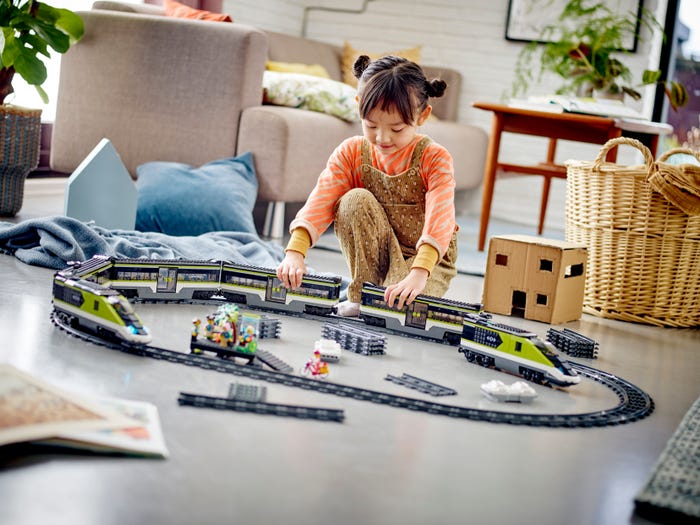 This premium set is a must-have for anyone passionate about trains or transport. The remote-controlled LEGO City Express Passenger Train features dimmable headlights, a dining car, passenger car and station platform.

There are 24 track pieces and 6 minifigures for imagination-fueled adventures that could lead anywhere!

The feature-packed train set comes with easy-to-follow building guide included in the box – perfect for all train fans aged 7+. 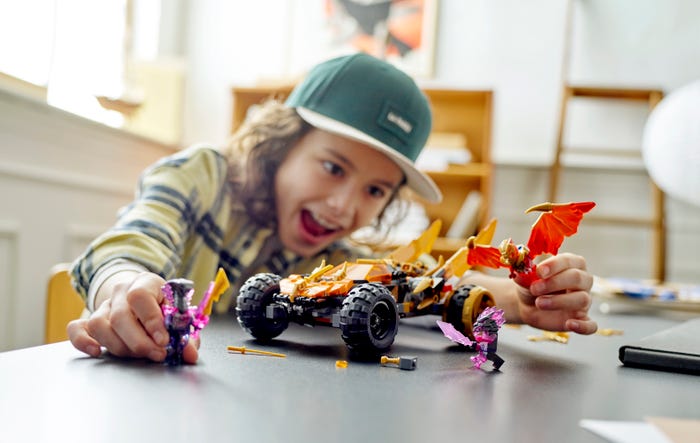 Drive right into the heart of the action with LEGO NINJAGO® Cole’s Dragon Cruiser!

Team up with Golden Dragon Kai and Golden Cole to battle ninja enemies General Aspheera and Vengestone Brute! This super-cool cruiser features 2 golden lightning blades that swing forward into dragon attack mode, as well as 2 stud shooters to take on the fearsome opponents.

Cole’s Dragon Cruiser makes an essential addition to the collection of any LEGO NINJAGO fan aged 8+ – there are 7 other sets from the NINJAGO: Crystalized TV series to collect and create endless thrilling adventures with! The police are hot on the tails of a sneaky crew of crooks who’ve hijacked an ice cream van! Join the high-speed chase and bring the criminals to justice!

This feature-rich playset gives kids a front-row seat to the action with a crook-customized ice cream truck with a splat launcher, plus a fully kitted-out police interceptor vehicle with a tire-shredder dispenser in tow!

Kids aged 5 and up will absolutely love reimagining their favorite scenes from the LEGO City Adventures TV series with this set. 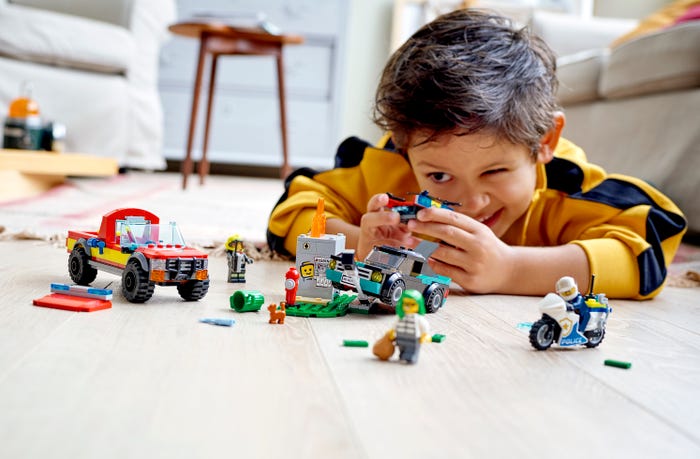 The LEGO® City Fire Rescue & Police Chase has all the excitement imaginative little heroes are looking for this Christmas!

Kids aged 5 and up can step in to save the day with a high-speed chase on the police motorbike to catch the sneaky crook’s getaway car and a powerful fire pickup and a drone to put out the fiery blaze.

Loaded with fun accessories like a fish, handcuffs, 2 walkie-talkies and 3 minifigures, including firefighter Bob from the LEGO City Adventures TV series, this gift is sure to ignite budding imaginations! 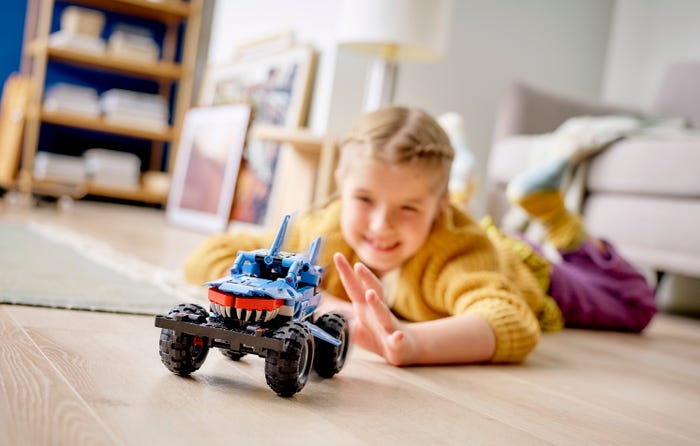 With pull-back action built in, kids can send the monster truck flying and perform cool stunts for countless hours of fun. Young Monster Jam™ monster truck fans and LEGO builders with an interest in engineering will love discovering this set’s unique features at Christmas! 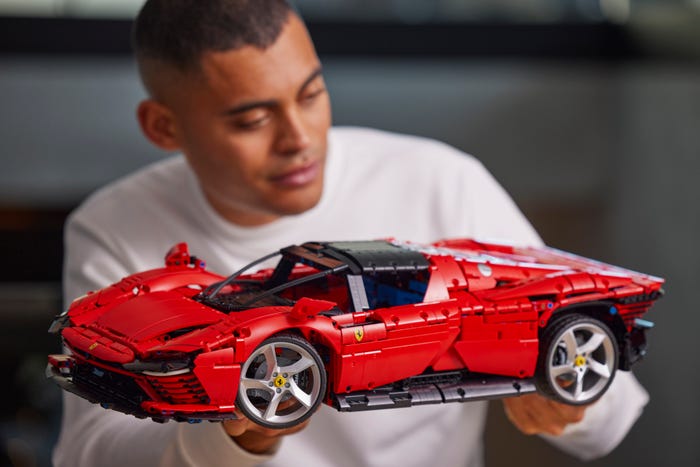 Featuring an 8-speed sequential gearbox with paddle shifter, a V12 engine with moving pistons and functioning butterfly doors, this LEGO Technic set for adults is made to be displayed. 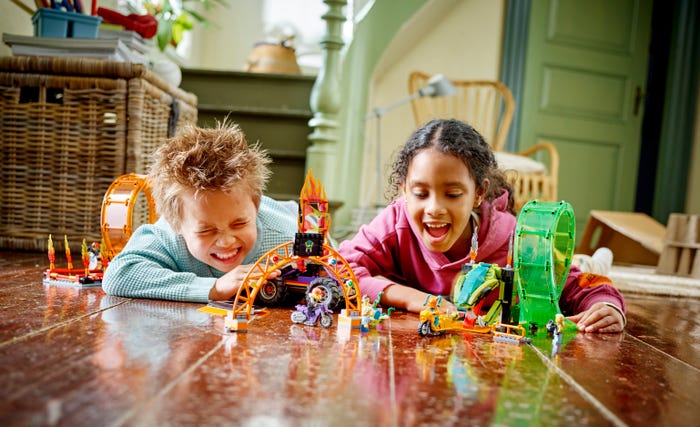 This set features 598 pieces and easy-to-follow building instructions which make it a fun build for kids aged 7 and above to enjoy solo, with friends or with family. 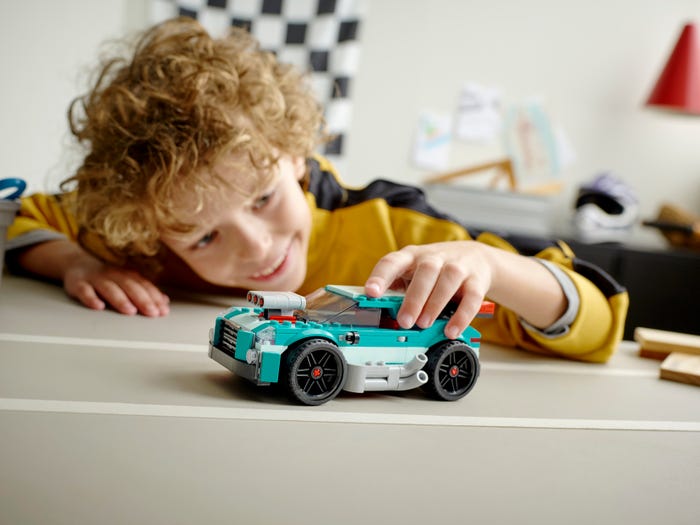 Featuring a super-cool teal-and-red color scheme, this 258-piece vehicle playset is the best Christmas gift you can get for young racers aged 7 and above.

The LEGO® Creator 3in1 Street Racer building set is perfectly portable for fun on the go, and since this set can be rebuilt into a street racer, a high-speed racing car or a hot rod, the excitement never has to stop! 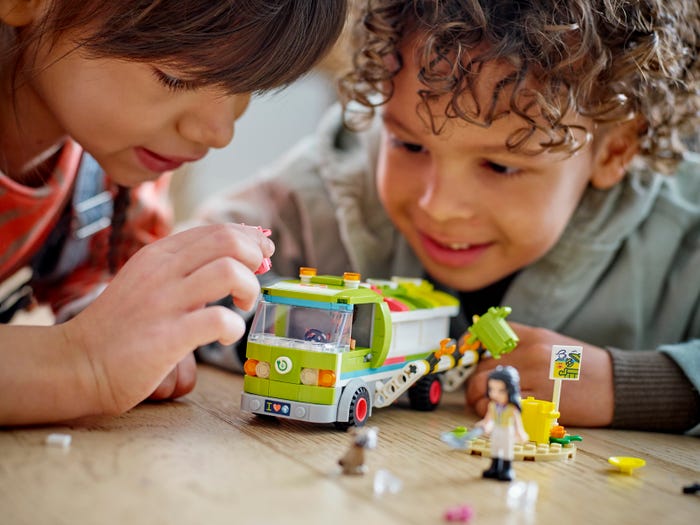 The recycling truck has 3 rubbish bins for recycling paper, food and glass waste separately, and comes with accessories like a toy shovel and a trash grabber! There’s also a super-cute raccoon figure for kids to role-play saving wildlife by caring for the environment, which makes this the best gift for environmentally-conscious kids aged 6 and above. 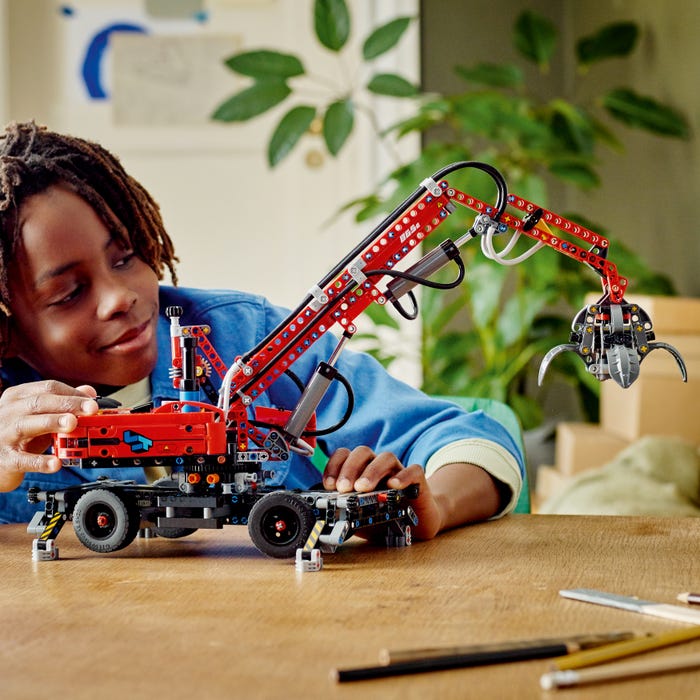 For kids aged 10+ who are interested in engineering and construction, the LEGO® Technic™ Material Handler is hands down the best Christmas present they’ll get this year!

Kids can explore the intricacies of mechanics with this realistic vehicle that features a rotating upper arm, a rising operators’ cab and an ‘orange peel’ style grapple that actually opens and closes!

Standing at 13 in. (35 cm) tall, this exciting model set welcomes budding builders into the amazing world of engineering.

Thanks to this list, you should be all set for vehicle toys this Christmas! If you’re shopping for people who are passionate about other things too, check out our incredible range of travel, music and STEM toys.