The ferocious—but hilarious—Chaos Catapult is chasing after the Royal Guard! But will the guard prove his worth and loyalty to Knighton and defeat the Crust Smasher, or will he be knocked off his feet by flying lava rocks and crossbow stud shooter? Includes 2 minifigures: Crust Smasher and a Royal Guard. 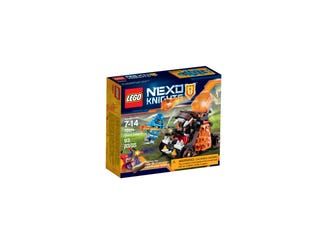